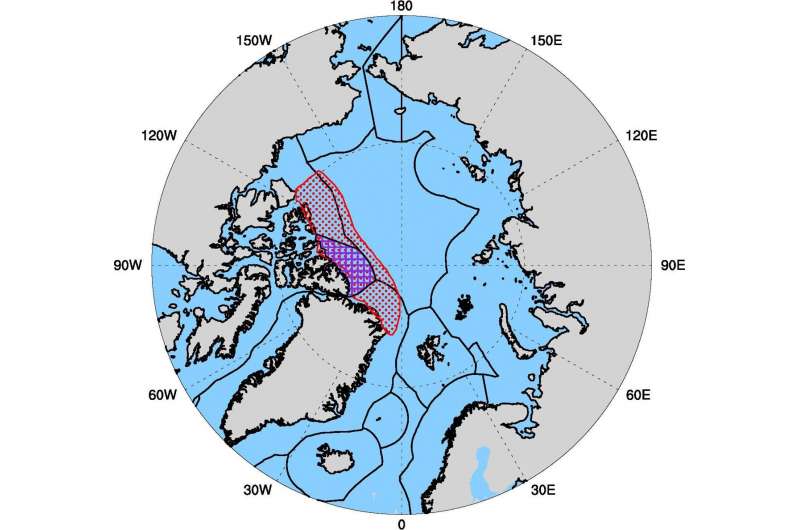 With warming climate, summer sea ice in the Arctic has been shrinking fast, and now consistently spans less than half the area it did in the early 1980s. This raises the question: It this keeps up, in the future will year-round sea ice—and the creatures who need it to survive—persist anywhere?

A new study addresses this question, and the results are daunting. The study targets a 1 million-square kilometer region north of Greenland and the coasts of the Canadian Archipelago, where year-round sea ice has traditionally been thickest, and thus likely to be most resilient. It says that under both optimistic and pessimistic scenarios, by 2050 summer ice in this region will dramatically thin. Under the optimistic scenario, if carbon emissions can be brought to heel by then, some summer ice could persist indefinitely. However, under the pessimistic scenario, in which emissions continue on their current path, summer ice would disappear by 2100, along with creatures such as seals and polar bears. The study appears in the journal Earth's Future.

"Unfortunately, this is a massive experiment we're doing," said study coauthor Robert Newton, a senior research scientist at Columbia University's Lamont-Doherty Earth Observatory. "If the year-round ice goes away, entire ice-dependent ecosystems will collapse, and something new will begin."

Scientists have been pondering the fate of Arctic sea ice for decades. Around 2009, researchers including Newton's coauthors Stephanie Pfirman and L. Bruno Tremblay first coalesced around the idea of what they have called the Last Ice Area—the region where summer ice will likely make a last stand.

In winter, most of the Arctic Ocean surface freezes, and probably will for the foreseeable future, even as climate warms. Ice can grow up to a meter thick each winter, and if it survives one or more summers, it can reach several meters. In summer, some melting usually occurs, and scattered open-water areas appear. This helps winds and currents carry floating ice great distances in various gyres, including the overarching Transpolar Drift, which carries ice clockwise from off Siberia toward Greenland and Canada. Each year, some ice is expelled into the North Atlantic via straits between Greenland and Norway. But much of it gets driven against the Arctic's farthest-north coasts, along Greenland and the Canadian islands. Here, repeated inflows of ice can build layers and pressure ridges as high as 10 meters. Much of it will remain for 10 years or more before eventually breaking off and moving back off.