Arctic & Antarctica
In glacial periods with low sea levels, exchange with the Pacific was halted and exchange with the North Atlantic was extremely reduced, while the Arctic basin was still receiving freshwater input. Exchange could only occur through narrow gateways in the Greenland-Scotland-Ridge. The sequence of three sketches shows (1) a period of freshening of the Arctic Ocean followed by (2) the release of freshwater to the North Atlantic, when saline water entered the Arctic Ocean and (3) sudden melting of the Arctic ice sheet upon contact with the relatively warm and salty Atlantic water. Martin Künsting / Alfred Wegener Institute. 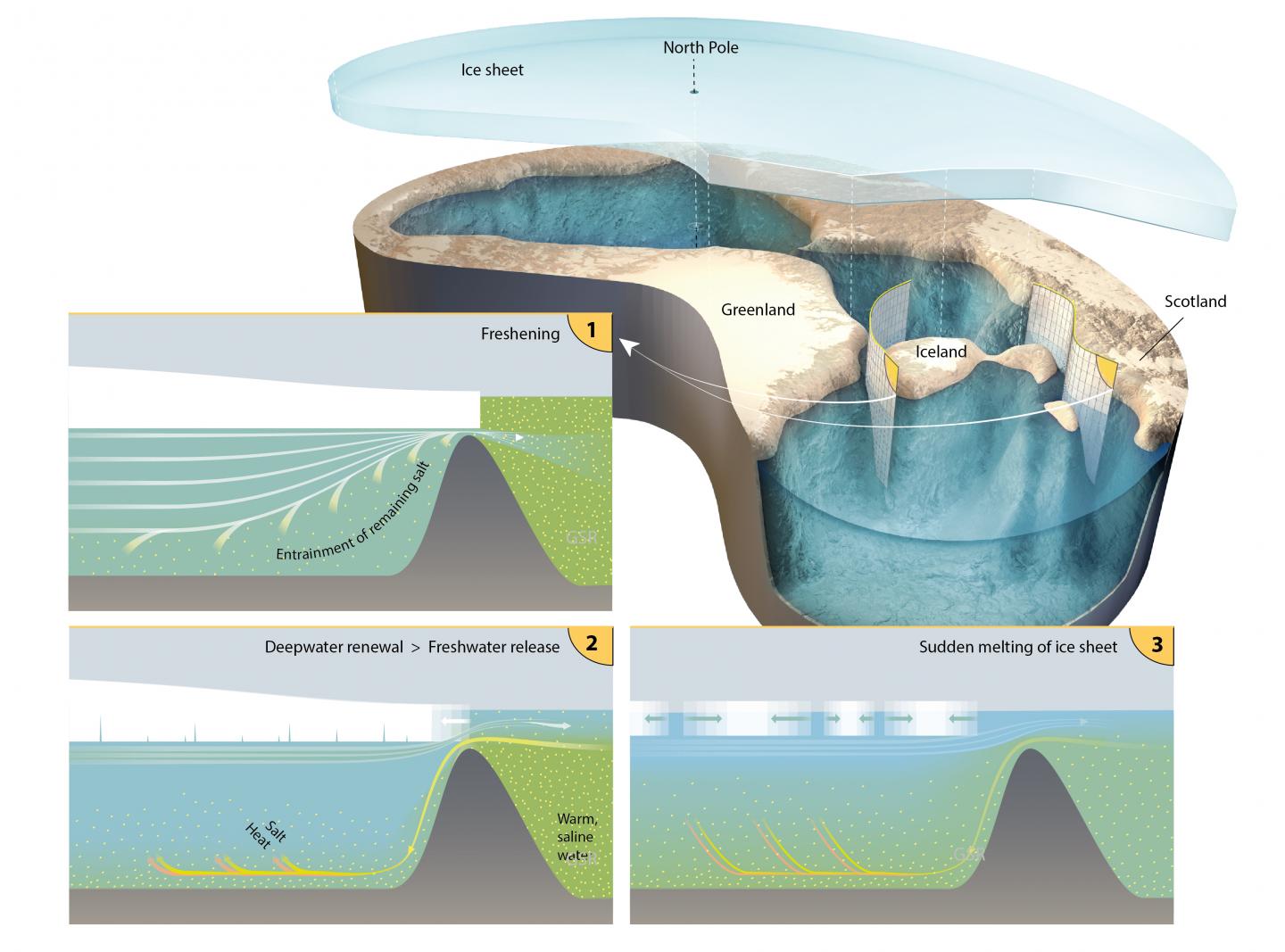 The Arctic Ocean was covered by up to 900 m thick shelf ice and was filled entirely with freshwater at least twice in the last 150,000 years.

This surprising finding, reported in the latest issue of the journal Nature, is the result of long-term research by scientists from the Alfred Wegener Institute and the MARUM. With a detailed analysis of the composition of marine deposits, the scientists could demonstrate that the Arctic Ocean as well as the Nordic Seas did not contain sea-salt in at least two glacial periods. Instead, these oceans were filled with large amounts of freshwater under a thick ice shield. This water could then be released into the North Atlantic in very short periods of time. Such sudden freshwater inputs could explain rapid climate oscillations for which no satisfying explanation had been previously found.

About 60.000 to 70.000 years ago, in a particularly cold part of the last glacial period, large parts of Northern Europe and North America were covered by ice sheets. The European ice sheet spanned a distance of more than 5000 kilometres, from Ireland and Scotland via Scandinavia to the Eastern rim of the Kara Sea (Arctic Ocean). In North America, large parts of what is now known as Canada were buried under two large ice sheets. Greenland and parts of the Bering Sea coastline were glaciated too. What was the ice situation like even further North, in the Arctic Ocean? Was it covered by thick sea-ice, or maybe with the tongues of these vast ice sheets were floating on it, far beyond the North Pole?

Scientific answers to these questions were more or less hypothetical so far. In contrast to deposits on land, where erratic boulders, moraines and glacial valleys are the obvious landmarks of glaciers, only few traces of vast ice shelves had been found so far in the Arctic Ocean. Geoscientists from the Alfred Wegener Institute Helmholtz Centre for Polar and Marine Research (AWI) and MARUM Center for Marine Environmental Sciences at the University of Bremen have now compiled existing evidence from the Arctic Ocean and the Nordic Seas, and combined it with new data to arrive at a surprising conclusion.