Arctic & Antarctica
This year’s minimum ice extent is the lowest in the 42-year-old satellite record except for 2012, reinforcing a long-term downward trend in Arctic ice cover. Each of the past four decades averages successively less summer sea ice. via NSIDC. 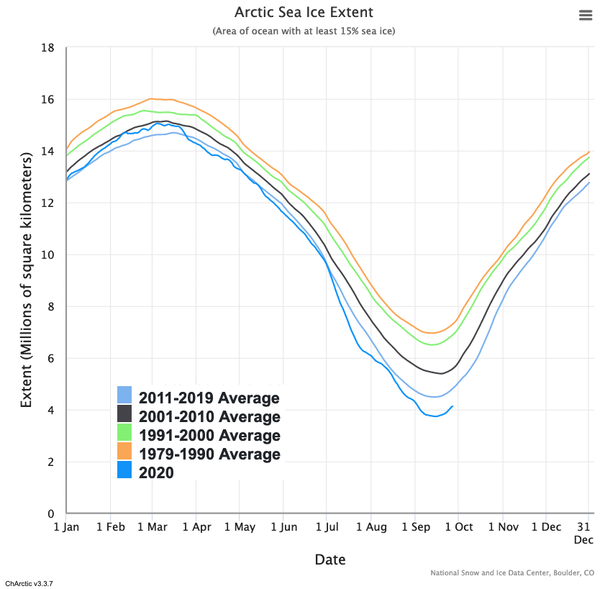 Extreme shrinkage of summer sea ice is just the latest evidence of rapid Arctic warming — and what happens in the Arctic doesn't stay there.

Every year, sea ice cover in the Arctic Ocean shrinks to a low point in mid-September. This year it measures just 1.44 million square miles (3.74 million square kilometers) – the second-lowest value in the 42 years since satellites began taking measurements. The ice today covers only 50% of the area it covered 40 years ago in late summer.

As the Intergovernmental Panel on Climate Change has shown, carbon dioxide levels in the atmosphere are higher than at any time in human history. The last time that atmospheric CO2 concentrations reached today’s level – about 412 parts per million – was 3 million years ago, during the Pliocene Epoch.

As geoscientists who study the evolution of Earth’s climate and how it creates conditions for life, we see evolving conditions in the Arctic as an indicator of how climate change could transform the planet. If global greenhouse gas emissions continue to rise, they could return the Earth to Pliocene conditions, with higher sea levels, shifted weather patterns and altered conditions in both the natural world and human societies.

We are part of a team of scientists who analyzed sediment cores from Lake El’gygytgyn in northeast Russia in 2013 to understand the Arctic’s climate under higher atmospheric carbon dioxide levels. Fossil pollen preserved in these cores shows that the Pliocene Arctic was very different from its current state.

Today the Arctic is a treeless plain with only sparse tundra vegetation, such as grasses, sedges and a few flowering plants. In contrast, the Russian sediment cores contained pollen from trees such as larch, spruce, fir and hemlock. This shows that boreal forests, which today end hundreds of miles farther south and west in Russia and at the Arctic Circle in Alaska, once reached all the way to the Arctic Ocean across much of Arctic Russia and North America.

Because the Arctic was much warmer in the Pliocene, the Greenland Ice Sheet did not exist. Small glaciers along Greenland’s mountainous eastern coast were among the few places with year-round ice in the Arctic. The Pliocene Earth had ice only at one end – in Antarctica – and that ice was less extensive and more susceptible to melting.