Arctic & Antarctica
Map of the study region. The colored lines denote the ship tracks of the oceanographic surveys whose data were used for the analysis of freshwater transport in the Arctic Ocean. Alexander Osadchiev et al. / Scientific Reports 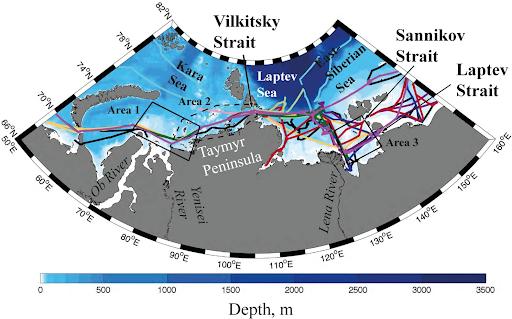 The Ob, Yenisei, and Lena rivers flow into the Kara and Laptev seas and account for about half of the total freshwater runoff to the Arctic Ocean.

The transport and transformation of freshwater discharge in these seas have a large impact on ice formation, biological productivity, and many other processes in the Arctic. Researchers from Shirshov Institute of Oceanology and MIPT have investigated the spreading of large river plumes -- that is, freshened water masses formed as a result of river runoff mixing with ambient saltwater -- in the Russian Arctic seas. The findings were published in Scientific Reports.

The Ob, Yenisei, and Lena rivers provide a huge volume of freshwater discharge to the Kara and Laptev seas. The total annual runoff from these three rivers is estimated at 2,300 cubic kilometers. The majority of this volume is discharged into the sea during the ice-free season, forming the Ob-Yenisei plume and the Lena plume, which are the largest in the Arctic and among the largest in the world ocean.

"River plumes are freshened water masses that form near river mouths and spread at sea as a relatively thin surface layer. River plume dynamics are mostly determined by wind forcing and river discharge rate," explained Alexander Osadchiev, a co-author of the study and a senior researcher at Shirshov Institute of Oceanology.

Previous studies revealed that in the absence of strong wind, the Coriolis force and the density gradient between the plume and the ambient seawater cause alongshore spreading of river plumes. That process induces a large-scale eastward freshwater transport that is observed in the Arctic Ocean along large segments of the Eurasian and North American shores. This feature strongly affects ice conditions in the region.

The study described in this article revealed how the Ob-Yenisei plume spreads from the Kara Sea to the Laptev Sea through the Vilkitsky Strait, which is located between the Severnaya Zemlya archipelago and the Taymyr Peninsula. The paper also addresses the Lena plume and its spreading from the Laptev Sea into the East Siberian Sea through the Laptev and Sannikov straits.