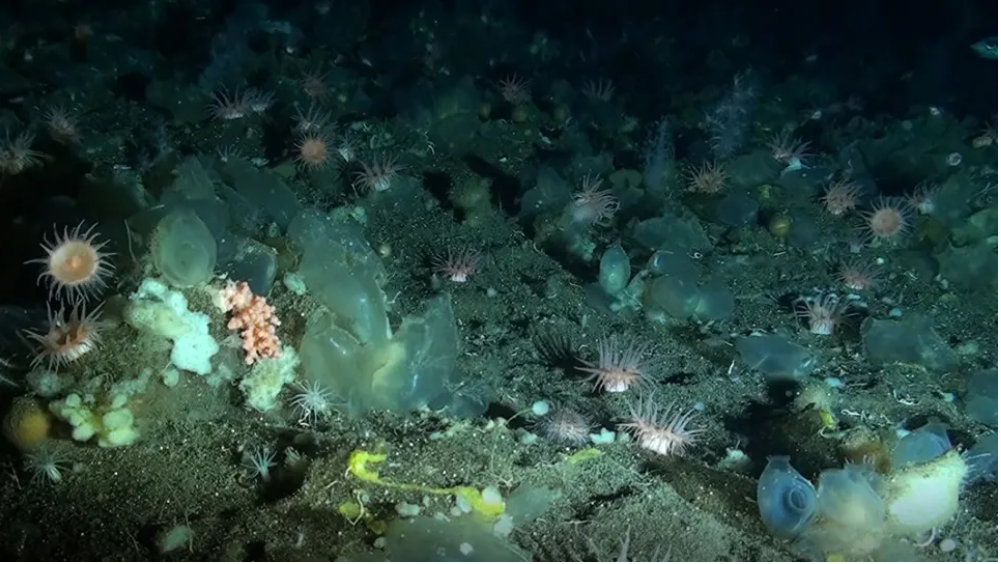 Living at depths approaching an entire mile, deep-sea Arctic sponges are a scientific curiosity, as they’ve somehow managed to make this extreme environment their home. New evidence gathered over the course of an entire year is taking biologists a step closer to understanding these ecologically important sponges and how they’re able to survive such harsh conditions.

Sponge grounds are an important contributor to deep-sea ecosystems, and they’re often compared to tropical reefs in this regard. Yet very little is known about their environment and the conditions responsible for making life possible, both for deep-sea sponges and the community of animals that live among them. Living more than 4,900 feet (1,500 meters) below the surface, and in waters below the freezing point, these organisms have no access to sunlight, and the food that does become available is exceptionally scarce. Despite this, sponge grounds are a veritable oasis for other invertebrates and fish.

“The deep sea, in most places, is barren and flat,” Furu Mienis, a marine geologist with the Royal Netherlands Institute for Sea Research, said in a statement. “And then, suddenly, we have these sponge grounds that form colourful, thriving communities.” To which she added: “It is intriguing how this system sustains itself in such a place.”

Mienis is the co-author of a new JGR Oceans study detailing a year-long investigation of a sponge ground located at the Schulz Bank of the Mid Atlantic Ridge.

“Apparently, this seamount and the hydrodynamic conditions create a beneficial system for the sponges,” she said.

Mienis’s team deployed a bottom lander—a large rig fitted with an array of sensors—at the summit of an Arctic seamount located in the Norwegian sea. In operation from July 21, 2016, to July 27, 2017, the bottom lander gathered data such as temperature and water oxygen levels, the flow of currents, and even the amount of food that trickled down from the surface.