Arctic & Antarctica
via University of Washington 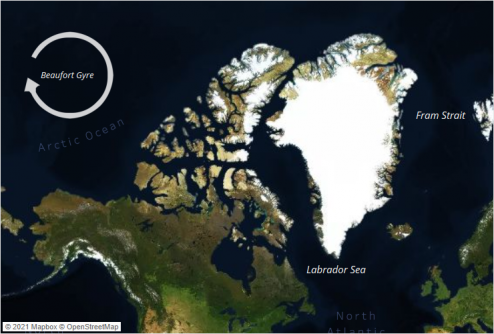 Newswise — Freshwater is accumulating in the Arctic Ocean.

The Beaufort Sea, which is the largest Arctic Ocean freshwater reservoir, has increased its freshwater content by 40% over the past two decades. How and where this water will flow into the Atlantic Ocean is important for local and global ocean conditions.

A study from the University of Washington, Los Alamos National Laboratory and the National Oceanic and Atmospheric Administration shows that this freshwater travels through the Canadian Archipelago to reach the Labrador Sea, rather than through the wider marine passageways that connect to seas in Northern Europe. The open-access study was published Feb. 23 in Nature Communications.

“The Canadian Archipelago is a major conduit between the Arctic and the North Atlantic,” said lead author Jiaxu Zhang, a UW postdoctoral researcher at the Cooperative Institute for Climate, Ocean and Ecosystem Studies. “In the future, if the winds get weaker and the freshwater gets released, there is a potential for this high amount of water to have a big influence in the Labrador Sea region.”

The finding has implications for the Labrador Sea marine environment, since Arctic water tends to be fresher but also rich in nutrients. This pathway also affects larger oceanic currents, namely a conveyor-belt circulation in the Atlantic Ocean in which colder, heavier water sinks in the North Atlantic and comes back along the surface as the Gulf Stream. Fresher, lighter water entering the Labrador Sea could slow that overturning circulation.