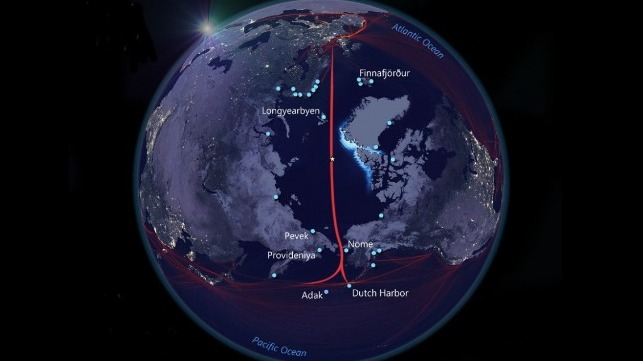 Sailing via the North Pole was impossible until the 1950s. Now, it is all but inevitable.

Even if all greenhouse gas emissions ceased, the Arctic Ocean is set to become ice-free in September by 2050.

Last summer, I wrote a blog post entitled, “The Arctic shipping route no one’s talking about.” Now, with four colleagues – Scott Stephenson, Kang Yang, Michael Bravo, and Bert De Jonghe – I’ve elaborated on the ideas explored in the post in the form of a peer-reviewed article, which has just been published in Marine Policy.

The latest scientific models suggest that a route directly via the North Pole may open as early as the 2040s. As we point out, this is significantly sooner than what models predicted in the early 2000s, when the consensus was that the Central Arctic Ocean would not become ice-free in summer until the 2070s.

The Transpolar Sea Route (TSR) will first open for a brief period in September of each year, when Arctic sea ice reaches its annual minimum. As climate change continues apace, the season will likely gradually lengthen to a point at which shipping via the TSR could become more commonplace.

Once open, the TSR will represent a third Arctic shipping route in addition to the Northern Sea Route (NSR) and Northwest Passage. The route will not suddenly spring into use just because sea ice disappears, however. Shipping requires infrastructure, from vessels to ports and search and rescue equipment.

Already, more ice-class vessels are being built — often in Chinese shipyards — to support gas development on the Yamal Peninsula and resource extraction in northern Canada and Greenland. Other ice-class vessels that have been in existence for many years are servicing new, more northern sites. In November 2019, for instance, MV Nordic Barents – the same ship which made the first foreign-flagged transit of the Northern Sea Route in 2010 – carried 41,000 tons of ilmenite from Moriusaq, Greenland to Quebec. Such ice-class ships could conceivably be employed along the TSR, too.