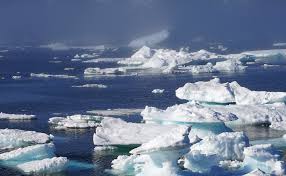 A 'crazy' year of heat waves and forest fires has led to Arctic sea ice melting to the second lowest level on record, according to a new study.

Experts from the National Snow and Ice Data Centre (NSIDC) found that the sea ice in the Arctic was 1.44 million square miles at the end of the annual summer melt.

This is the second lowest level of sea ice cover at the end of summer in the nearly 42 years since satellites started recording sea ice extent - the lowest was in 2012. The low level of sea ice has been blamed on a crazy year due to near 100 degree Fahrenheit heat waves in Siberia and massive forest fires across the region.

Campaigners have called for governments to take immediate action including policies aimed at reducing the level of greenhouse gas emissions.

Mark Serreze, director of NSIDC said 2020 will stand as an 'exclamation point on the downward trend in Arctic sea ice extent'.

'We are headed towards a seasonally ice-free Arctic Ocean, and this year is another nail in the coffin,' explained Serreze.

Ed Blockley, Met Office scientific manager for polar climate, said it was only the second time sea ice in the Arctic has dropped below 1.5 million square miles.

'This threshold has been crossed because this summer has seen several periods of very rapid sea ice loss linked, in part, to the record-breaking heatwave in Siberia. The Arctic is one of the most vulnerable regions on Earth to climate change and warming here will have consequences for the region and the planet as a whole.'

The news of the low ice cover prompted calls from environmental campaigners for rapid action to curb climate greenhouse gas emissions and protect the oceans.

Rod Downie, chief polar adviser at WWF, said the Arctic was in 'meltdown' and was one of the most 'visible and dramatic' signs of the climate crisis we face.