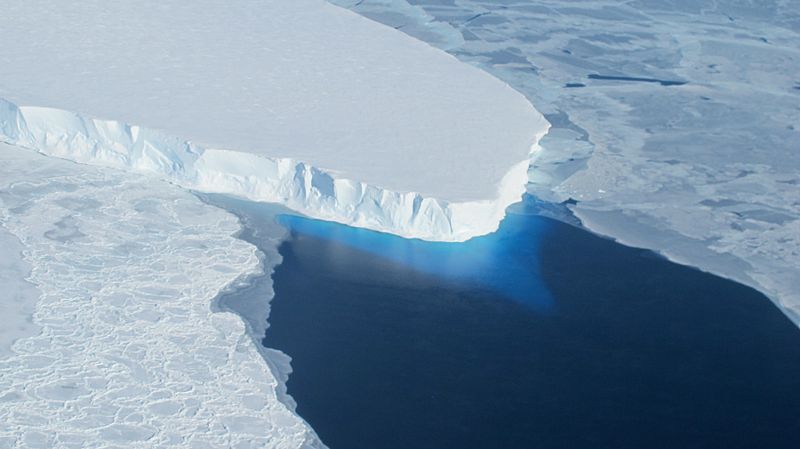 Antarctica - The Threat from Thwaites: The Retreat of Antarctica's Riskiest Glacier

Antarctica’s Thwaites Glacier is retreating rapidly as a warming ocean slowly erases its ice from below, leading to faster flow, more fracturing, and a threat of collapse, according to an international team of scientists. The glacier is the size of Florida or Britain and currently contributes four percent of annual global sea level rise. If it does collapse, global sea levels would rise by several feet—putting millions of people living in coastal cities in danger zones for extreme flooding.

“Thwaites is the widest glacier in the world,” said Ted Scambos, a senior research scientist at the Cooperative Institute for Research in Environmental Sciences (CIRES). “It’s doubled its outflow speed within the last 30 years, and the glacier in its entirety holds enough water to raise sea level by over two feet. And it could lead to even more sea-level rise, up to 10 feet, if it draws the surrounding glaciers with it.”

Scambos is the U.S. lead coordinator for the International Thwaites Glacier Collaboration (ITGC): a team of nearly 100 scientists funded by the U.S. National Science Foundation and U.K. Natural Environment Research Council dedicated to studying the vulnerable glacier. The five-year collaboration is aimed at collecting instrument data throughout the glacier and the adjacent ocean, and modeling ice flow and the future of the ice sheet. Their work has revealed major changes in the ice, the surrounding water, and the area where it floats off the bedrock below.

This work was presented at the AGU Fall Meeting during a press conference on December 13. Recording here.

CIRES is a partnership of NOAA and CU Boulder.

Thwaites sits in West Antarctica, flowing across a 120km stretch of frozen coastline. A third of the glacier, along its eastern side, flows more slowly than the rest—it’s braced by a floating ice shelf, a floating extension of the glacier that is held in place by an underwater mountain. The ice shelf acts like a brace that prevents faster flow of the upstream ice. But the brace of ice slowing Thwaites won’t last for long, said Erin Petitt, an associate professor at Oregon State University.

Beneath the surface, warmer ocean water circulating beneath the floating eastern side is attacking this glacier from all angles, her team has found. This water is melting the ice directly from beneath, and as it does so, the glacier loses its grip on the underwater mountain. Massive factures have formed and are growing as well, accelerating its demise, said Pettit. This floating extension of the Thwaites Glacier will likely survive only a few more years.