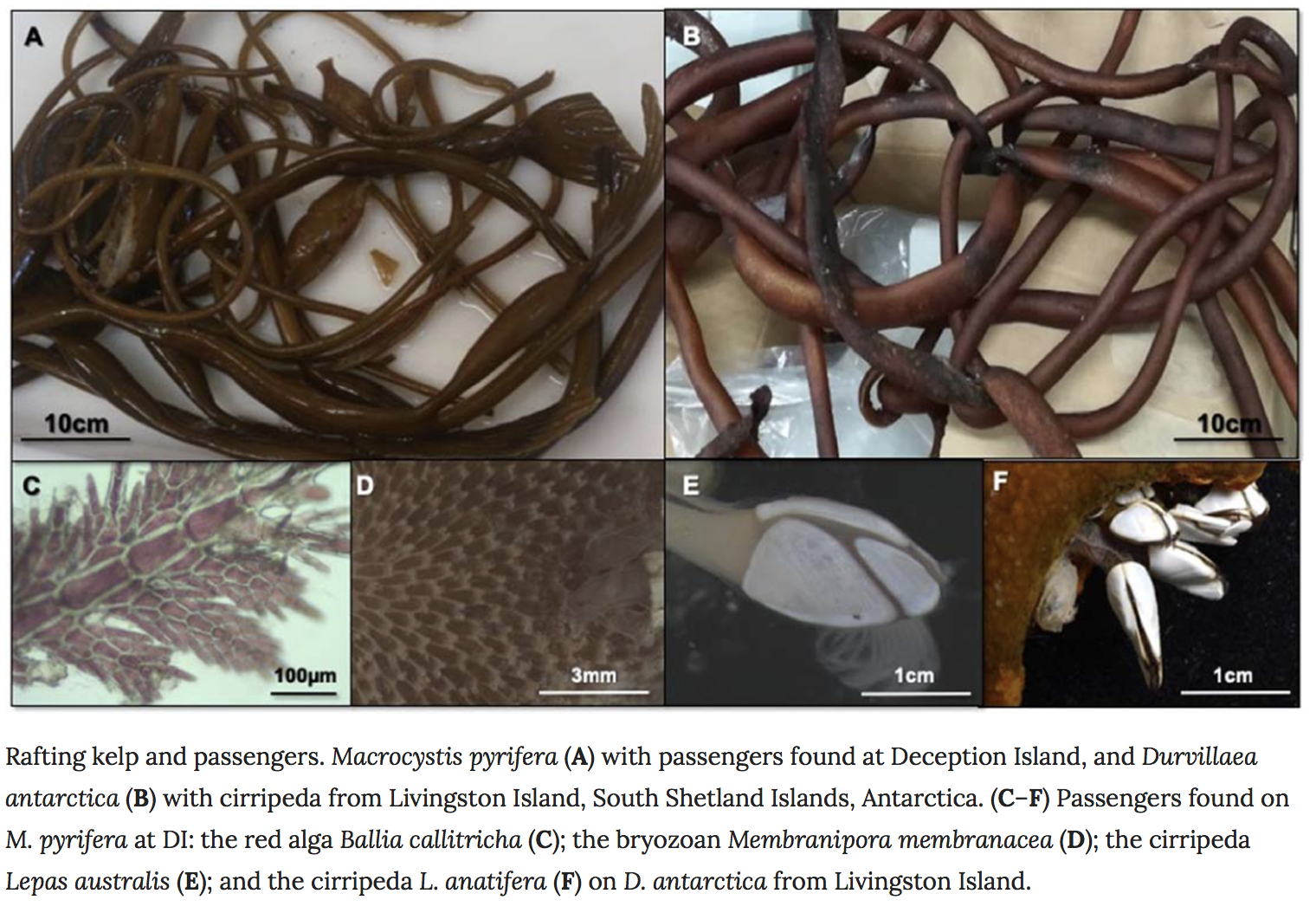 Antarctic shallow coastal marine communities were long thought to be isolated from their nearest neighbours by hundreds of kilometres of deep ocean and the Antarctic Circumpolar Current. The discovery of non–native kelp washed up on Antarctic beaches led us to question the permeability of these barriers to species dispersal.

The discovery of non–native kelp washed up on Antarctic beaches led us to question the permeability of these barriers to species dispersal. According to the literature, over 70 million kelp rafts are afloat in the Southern Ocean at any one time. These living, floating islands can play host to a range of passenger species from both their original coastal location and those picked in the open ocean.

Driven by winds, currents and storms towards the coast of the continent, these rafts are often cited as theoretical vectors for the introduction of new species into Antarctica and the sub-Antarctic islands. We found non-native kelps, with a wide range of “hitchhiking” passenger organisms, on an Antarctic beach inside the flooded caldera of an active volcanic island.

This is the first evidence of non-native species reaching the Antarctic continent alive on kelp rafts. One passenger species, the bryozoan Membranipora membranacea, is found to be an invasive and ecologically harmful species in some cold-water regions, and this is its first record from Antarctica.

The caldera of Deception Island provides considerably milder conditions than the frigid surrounding waters and it could be an ideal location for newly introduced species to become established. These findings may help to explain many of the biogeographic patterns and connections we currently see in the Southern Ocean. However, with the impacts of climate change in the region we may see an increase in the range and number of organisms capable of surviving both the long journey and becoming successfully established.

Human activity and shipping have long been considered the principal threats to the “biosecurity” of the remote and isolated shallow marine ecosystems of Antarctica1. However, recent work has shown that the Southern Ocean’s (SO) strong, circumpolar winds, currents and fronts may not be a barrier to natural colonization from the north2,3,4. Floating kelp is a potential vector for distributing species across the vast oceanic distances between the sub-Antarctic islands.

It has been estimated that there may be over 70 million kelp rafts afloat at any one time in the Sub-Antarctic, 94% of which are Durvillaea antarctica5. The remote archipelagos distributed between 45 and 60° S are key locations for dispersal either side of the Polar Front (PF) and across2,3,4,6.

The discovery of the non-Antarctic bull kelp, D. antarctica on Antarctic beaches, coupled with oceanographic models, demonstrate a non-anthropogenic mechanism for species introduction into Antarctica4. Genomic analyses revealed that the kelp specimens originated in the sub-Antarctic (Kerguelen Island and South Georgia) and dispersed thousands of kilometres to reach the Antarctic coast4. The only epibionts found on these specimens were goose barnacles (Lepas australis), and this epipelagic species is likely to have colonised the kelp during its time drifting in the open ocean4