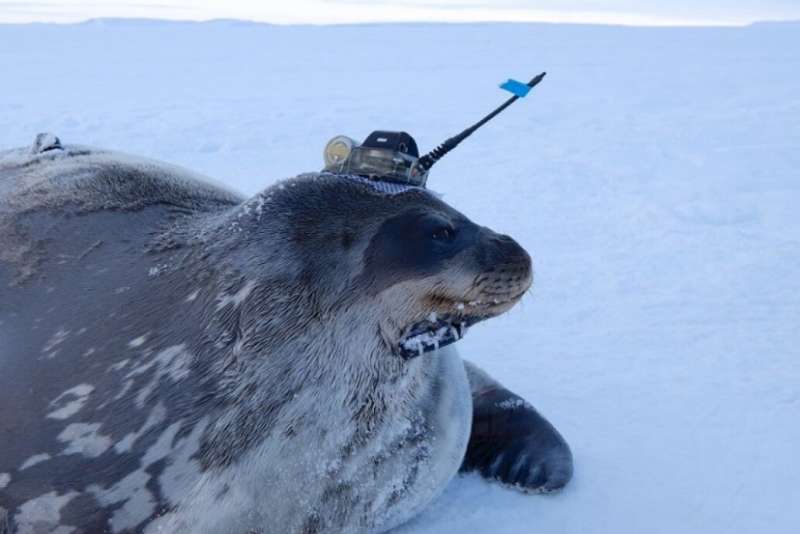 Oceanographers have great difficulty conducting investigations by ship in Antarctic continental shelf areas where ice is attached to the shore, so a team of researchers have replaced these boat-based studies with sensors attached to seals, which have far less trouble navigating such waters.

A study describing the animal-born investigation technique and the researchers' findings appeared in the journal Limnology and Oceanography on October 9.

The continental shelves of Antarctica are one of the most biologically productive regions in the world's oceans as a result of the large amount of nutrients generated by interactions between ocean, sea ice and ice shelf. In East Antarctica, strong katabatic wind enhances sea ice production in the coastal polynyas, areas of open, unfrozen seawater surrounded by sea ice. Outside the polynyas, sometime extensive sea ice attached to the shore (known as landfast ice) exists where a lot of predators such as Weddell seals and emperor penguins inhabit.

These ocean, sea-ice and ice-shelf water exchanges—particularly those between deep warm waters coming from off-shelf areas, sea-ice zones that change with the season, and coastal polynyas—play important roles in biological production throughout continental shelf areas.

As a result of the substantial seasonal and regional variation of such 'cross-shelf' flows of water, much more data describing how both surface and deep waters from nearby off-shelf areas intrude onto the shelf and mix with local waters is necessary for a deeper understanding of biological production here.

But due to the difficulty of conducting oceanographic observations by ship in continental shelf areas covered by landfast ice, these cross-shelf water exchanges and their seasonal variations are not well understood.

In recent years, researchers have begun to deploy oceanographic data logging equipment to marine animals, in particular equipment that records conductivity, temperature and depth (CTD). The CTD data are fundamental to determine the ocean water's characteristics through the entire water column, and they allow scientists to estimate the origin of water.

"Previous studies using instruments strapped to migrating southern elephant seals and resident Weddell seals—a deep diving predator—had shown some interesting physical processes in Antarctic areas," said Nobuo Kokubun, an assistant professor with Japan's National Institute of Polar Research and the lead author of the study, "but even here, there has barely been anything investigating coastal areas covered by landfast ice."