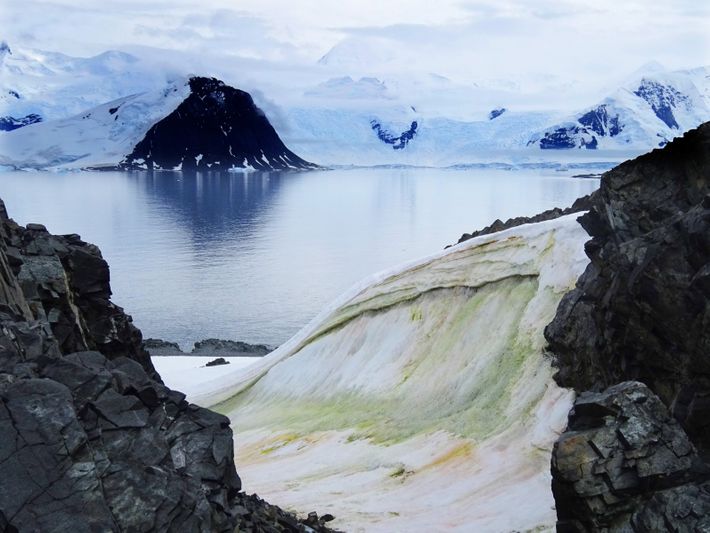 ANT - Algae is Turning Coastal Antarctica Red and Green – And it Could Have Big Implications.

Scientists studying the light-rich but low-nutrient ecosystems now believe they could be a model for how life could survive on other planets.

The pristine white of Antarctica’s coast and low lying areas are turning red and green in its summer months as algae bloom across the ice and snow. The microscopic plants are forming carpets about 20mm deep in the ‘warmer’ waters of the frozen continent where snow and ice turn to slush in temperatures just above 0oC. And scientists believe the algae’s survival in the most inhospitable climate on Earth could provide valuable insights into plants that might grow in space.

A study published in Nature Communications, found 1,679 green algal blooms on the frozen desert of the Antarctic Peninsula. The algae are feeding on the nutritious nitrates found in seabird and seal excrement. More than 60% of algal blooms recorded by the researchers were within 5km of penguin colonies, say researchers from the University of Cambridge and the British Antarctic Survey.

To estimate the distribution, size and biomass of snow algae blooms across the entire Antarctic Peninsula the scientists painstakingly mapped blooms of algae on the ground at two coastal Antarctic locations – Ryder Bay, Adelaide Island, and the Fildes Peninsula, King George Island – and then cross-referenced this with three years’ of data from the European Space Agency’s Sentinel 2 multispectral imaging satellites.

“I was surprised how much algae was there compared to mosses and lichens,” said Dr Matt Davey from the University of Cambridge’s Department of Plant Sciences. “It’s a beautiful sight when you see all of these oranges, reds and greens. Some of the valleys on the island almost look like fields with the mosses and lichens and the green blooms of algae in the snow, but everywhere else it’s still white and blue and quite stunning.”