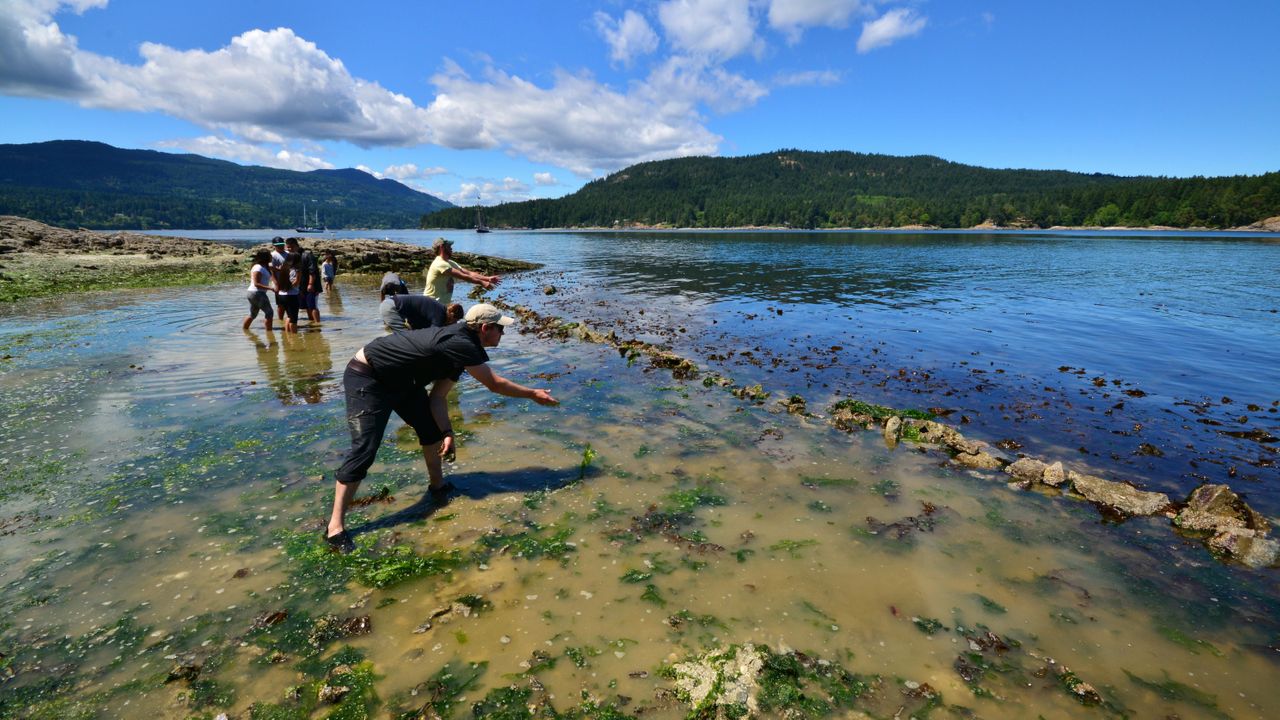 Tens of thousands of wooden stakes poking up from British Columbia's shoreline have smashed a long-held stereotype of Canada's First Nation people.

At the lowest tides, Canada's Comox estuary exposes a nearly forgotten story: the nubs of more than 150,000 wooden stakes are spread out across the intertidal zone, forming the remnants of hundreds of ancient fish traps. At peak use, it's believed the industrial-level installation provided food security for an estimated 10,000-12,000 K'ómoks People, the traditional inhabitants of the bountiful, mountain-fringed Comox Valley, located on the east side of Vancouver Island on the edge of the Salish Sea.

Until recently, the sophisticated technology had been overlooked by Western science. Even though the stakes, which are thumb-sized in diameter in the shallows and increase to the size of small tree trunks in deeper water, are visible from busy shore-side roads, no-one thought much about them. For Cory Frank, manager of the K'ómoks Guardian Watchmen, a role that oversees all aspects of environmental stewardship for the coastal Nation, the stakes were just something he grew up with, playing and fishing among them at low tide.

When he asked elders about them, they didn't have much information.

Frank says this began to change almost two decades ago. In 2002, Nancy Greene, then an undergraduate anthropology student, began researching the stakes for her senior thesis. Greene (now a research archaeologist) wanted to know what they were for. So, working with a team of volunteers, she began heading out at low tide and spent months recording the locations of 13,602 exposed tips of Douglas fir and western red cedar stakes. At the same time, she began asking the K'ómoks elders what she was looking at.

When she plotted them out, taking into account the oral history, the results were astounding. The stakes formed a constellation outlining one of the most extensive and sophisticated Indigenous fishing operations ever found.

Greene realised that the 150,000 to 200,000 stakes, representing more than 300 fish traps, filled the shallow wetland. Radiocarbon dating placed the ages to range from 1,300 to just more than 100 years old. For Frank, the most impressive thing about the system is the precision of the designs. "My ancestors were amazing engineers," he said.

He explained that once he started studying how it all worked, he realised the traps are based on a deep knowledge of fish behaviour and the region's large tidal ranges. Laid out in two styles – one heart shaped and one chevron shaped – the traps were lined with removable woven-wood panels that let water through but not the fish. During a rising tide, the fish followed the centreline of the trap, which mimicked the shoreline they'd naturally follow, through an entrance and into the enclosure. When the tide receded; the fish inside the trap were stranded in shallow pools.