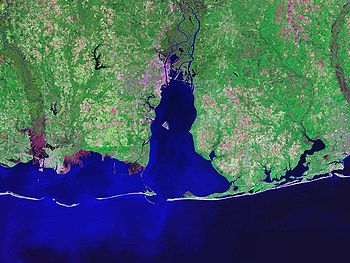 MOBILE, Ala. (AP) — Alabama’s port city has long lacked public access to much of its waterfront because of shipping wharves and industry along the Mobile River and Mobile Bay, but a new deal could open up more space for residents and tourists to get near the water.

By
The Associated Press
Section:
Waterways
Region:
Gulf of Mexico

Mobile officials and Gov. Kay Ivey last week announced a partnership between the city and the state to purchase bayfront property near downtown owned by the University of South Alabama Foundation.

Mayor Sandy Stimpson told a news conference the agreement will allow for the creation of public access along the Mobile Bay waterfront and preservations of wetlands. The city parks and recreation agency will manage the area, he said.

“This is a truly transformational purchase that will impact Mobilians for generations to come,” Stimpson said Tuesday.

The roughly 300-acre Brookley by the Bay property sits along the western shore of Mobile Bay east of Brookley Aeroplex, where Airbus makes jetliners. The land will cost $33 million, with a $9 million option to purchase more acreage within five years, WALA-TV reported.