Gulf of Mexico
A diver swims around an artificial reef placed in the Gulf of Mexico four years ago by Alabama Power and multiple partners. (contributed) 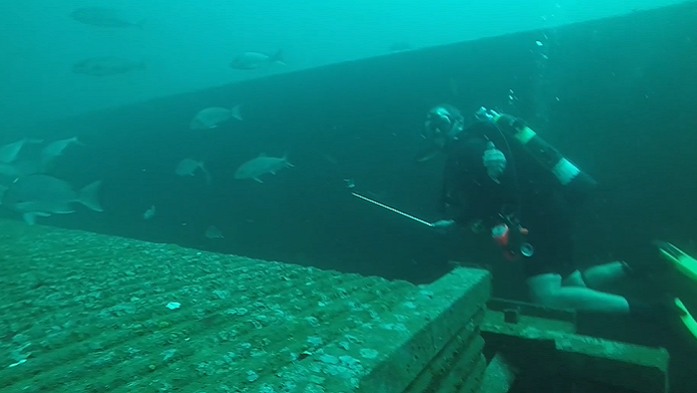 AL - Artificial reef teeming with life in Gulf of Mexico

An artificial reef created in the Gulf of Mexico four years ago by Alabama Power and multiple partners appears to be teeming with life.

In 2016, two of Alabama Power’s retired boilers were sunk off the coast of Mobile County to improve the marine ecosystem. The giant steel structures previously used to turn steam into power have also proven to be a boon for offshore anglers.

“We put the reef down in the water that day, and it looks like you are just putting in something not useful and, now to see it flourish as a fish habitat and all the wildlife that’s there, it’s actually exciting,” said Susan Comensky, Alabama Power vice president for Environmental Affairs. “It’s a great success, and we are so grateful for what everybody brought to the table to make it a success.”

For decades, thousands of man-made objects, like old ships and concrete bridge rubble, have been sunk off the Alabama coastline. The 200,000-pound boilers were sunk from a barge donated by Cooper/T. Smith Corp., a marine transportation firm headquartered in Mobile.

Artificial reef off Alabama coast is full of marine life from Alabama NewsCenter on Vimeo.

The state’s artificial reef zone stretches almost from Florida to Mississippi and out 60 miles from shore. The result is one of the country’s best places for offshore fishing.

“We have several thousand (artificial) reefs off the coast of Alabama, and we have the biggest and best red snapper fishery in the world,” said Chris Blankenship, Alabama Department of Conservation and Natural Resources commissioner. “We have built an incredible fishery off the coast of Alabama that is really unrivaled anywhere in the Gulf of Mexico or, really, in the country.”

The reefs have been a boon for the fish and the state’s economy.

“Every weekend that the red snapper fishery is open, as well as amberjack, gray triggerfish, vermillion snapper, there are people with thousands of boats that buy gas and bait and stay in hotel rooms. All of that adds to quite a big economic impact for the coastal areas of our state,” Blankenship said.

However, it’s not just anglers that are drawn to the reefs.

“A wide range of user groups can benefit from this reef – recreational anglers, commercial anglers and any kind of eco-tourism, things like scuba divers and underwater photography,” said Craig Newton, biologist with the Alabama Marine Resources Division.