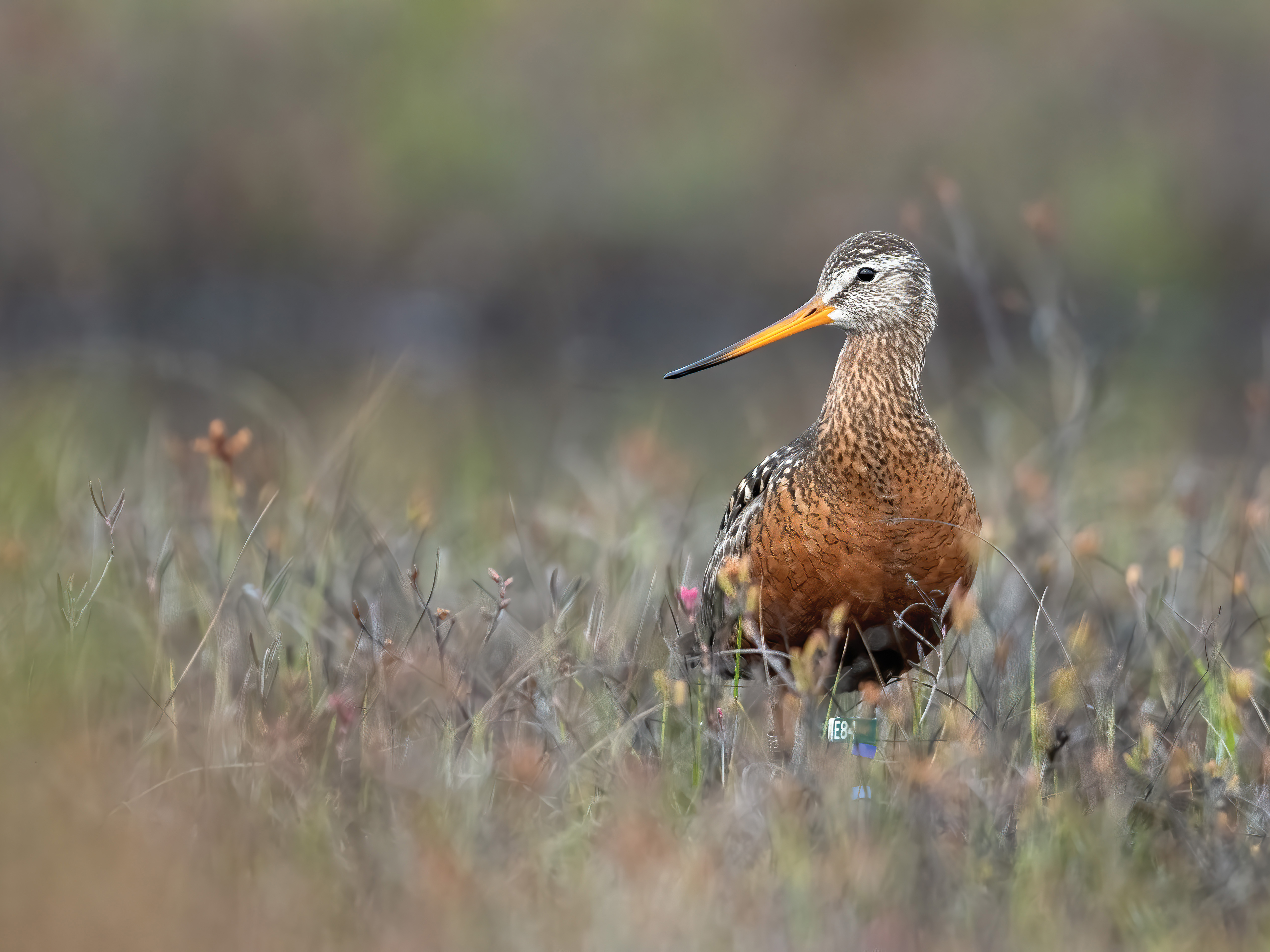 AK - This Wonder Bird Flies Thousands of Miles, Non-Stop, as Part of an Epic Migration

The more scientists learn about the Hudsonian godwit, the more they’re amazed—and worried

Bog walking is a treacherous business. The bog, or muskeg, near Beluga, Alaska, is a floating mass of vegetation, grassy hummocks and stunted black spruce trees that stretch for miles in every direction, with the snow-flecked mountains of the Alaska Range shining in the distance. Few trails exist. Walking here is like sloshing across a very wet sponge, as each step sinks into a few inches of water. It feels as if the ground might give way. Sometimes it does. A wrong step can sink the uninitiated into thigh-deep water that requires a hand up. Clouds of mosquitoes search for any bit of exposed flesh. Rangy moose emerge from groves of dwarf trees to threaten trespassers.

This, however, is where one of the world’s premier ultra-endurance athletes lives.

Long-distance migration is the most extreme and life-threatening thing that any animal does. And migratory shorebirds make the most miraculous journeys of all, given the distances they cover and their tiny size. There are some 70 species of shorebirds in the world that make the journey from the top of the globe to the bottom and back every year.

The Hudsonian godwit is one of them. Named after the Canadian bay where the species was first identified, and the bird’s distinctive two-syllable cry (“god-wiiit!”), Hudsonian godwits lay their eggs each spring in this Alaskan bog. (All godwits breed in the Northern Hemisphere.) In June or July, they leave their self-sufficient hatchlings and head south. First, they fly for three days to the wetlands of Saskatchewan and feed for one month. Then they continue down through the Americas to the northern Amazon—a 4,000-mile trip. They feed again and a week later head to Argentina, feeding another time before continuing over the Andes to Chiloé Island, on the fecund Gulf of Ancud, where they arrive in September or October and winter for a little over six months.

The longest leg of their journey, some 6,000 miles, is on the return from Chile. They fly night and day at speeds between 29 and 50 miles per hour, not stopping to eat, drink or rest. They pause for a couple of weeks to refuel in wetlands in the central United States—usually Nebraska, South Dakota, Kansas or Oklahoma—and then continue back to the Alaskan bog. Their goal is an endless summer.

In person, the Hudsonian godwit is prepossessing, sleek and reddish brown and gold in its Alaskan spring breeding colors, with slender stiltlike legs and a very long, upturned bill specially designed for feeding in mud. If you are a researcher trying to capture and study baby Hudsonian godwits, you’ll look for a well-camouflaged, soup-cup-size nest on the ground. Once you find it, you’ll get close enough to the mother bird to scare her into flight.

That’s why Nathan Senner, an assistant professor of ornithology at the University of South Carolina, is patiently and doggedly slogging through this swamp, clad in army-green hip boots. He’s accompanied by his wife and fellow ornithologist, Maria Stager, and master’s student Lauren Puleo. They are waiting for the elegant, long-legged, long-billed mother bird to fly up, shrieking and scold-ing, leaving its four—almost always four—moss-brown eggs exposed.

“What attracted me to them was this mystery that I knew something about and could help out with.”

A problem with this tactic is that some females are so hard-wired to protect their brood, they won’t fly away from the nest entirely, even when you’re close enough to step on them.

“So the holy grail for finding a nest is the incubation switch,” Senner explains. That happens when the male returns home from a day feeding on mollusks and marine worms on the vast shimmering mud flats in the nearby Gulf of Alaska. The researchers spot him as he zooms in to take over nest duties so the female can feed. “You see the male go to the ground and the female pop up. And, aha, there’s the nest.”

Tromping through the bog last spring, Senner and his team found 15 nests. No small feat: It takes 24 person hours of searching in the perpetual twilight of late spring in Alaska to find just one. When a nest is found, Senner picks up and floats each egg in a small clear plastic cup filled with water. In one case, an angry mother godwit casts an agitated eye from the top of a nearby stunted tree and dive bombs the research crew to defend her nest. Senner nonchalantly ducks the angry bird and continues his work. The height and angle of the floating egg indicates when the chicks will hatch: His goal is to come back and find the babies within hours after they’ve pecked their way out of their shells.

Robins, bluebirds, hummingbirds and many other birds are altricial. That means they are helpless at birth, featherless, eyes closed and nest-bound, and they need parental care before they learn to fly. Godwits and most other ground nesters, on the other hand, are precocial birds. The hatchlings are raring to go a couple of hours after they emerge, running across the bog snapping at swarms of mosquitoes and flies. This immediate self-sufficiency also helps them avoid being gobbled up in the nest by a voracious mew gull or a fox. Either way, after those first few hours, they’ll be hard to find and therefore lost to the cause of research. Senner isn’t worried. “I have literally never missed a hatch,” he says.

A newly hatched Hudsonian godwit weighs less than one ounce, though before it sets off on its journey to the other end of the world, it bulks itself up to more than 12 times that weight. Scientists who study these birds readily confess to not knowing many important facts about them—from where some of them stop over to how they use magnetic forces, how they read weather systems and, in general, how the hell they can possibly do what they do. Answers to initial questions often spawn a flock of more vexing ones.

A big reason Senner comes here in the spring is to suss out the forces that are driving down the numbers of Hudsonian godwits and other migratory shorebird species. In 2018, he and John W. Fitzpatrick, the recently retired executive director of one of the world’s leading bird research institutions, the Cornell Lab of Ornithology, co-authored a New York Times op-ed about migratory shorebirds that concluded, “Numbers of some species are falling so quickly that many biologists fear an imminent planet-wide wave of extinctions.” This free fall—which Senner and Fitzpatrick call the “number one conservation crisis facing birds”—is why far-flung teams of researchers around the globe are striving with more urgency than ever to unravel the myriad mysteries of migratory shorebirds.

Senner has been immersed in the world of migratory shorebirds almost all of his life. “I grew up with godwits,” he says. He was a serious birdwatcher as a youngster, hiking with his parents on a coastal trail near his Anchorange home, where godwits were a common sight. His father, Stanley, was the executive director of the Audubon state office in Alaska, and was part of the scientific team that responded to the Exxon Valdez oil spill in 1989. Young Nate grew up with avian flashcards and dinner conversations about the challenge of protecting birds.

Another of Senner’s passions has further cemented his kinship with these migrants: He runs marathons, which gives him even more respect for the marathoners of the bird world. (His best time is an impressive 2:29.10.)

Senner is 40 and whip-thin, with a ready grin and a wealth of bird knowledge in his head. As an undergraduate at Carleton College, he worked on shorebird biology with the United States Geological Survey (USGS) in Alaska. He earned his PhD at Cornell and worked as a postdoc at the Global Flyway Network with famed Dutch researcher Theunis Piersma at the University of Groningen.

Because he grew up in Anchorage with Hudsonian godwits right outside his back door, Senner says he never thought too much about them until he learned that “most people thought godwits were really special, super mysterious and one of the rarest birds in North America, because they had never seen one. They came to Alaska to see them. And so what attracted me to them was this mystery that I knew something about and could help out with.” He became more curious, too, about where the godwits went when they left.

After he earned his undergraduate degree, he was awarded a Thomas J. Watson fellowship, which funds recent graduates to travel the world to follow their passions. He went to Brazil, Peru and elsewhere in South America to see what he could find out about godwit migration. The tracking technology was still in its early stages then, but before long, he says, there was “an explosion of technology that allowed us to blow the doors off all of these questions which we had no idea about.”

A breakthrough in miniature tracking technology allowed researchers to see precisely where migratory birds went on their journeys. This was no small revelation. Where birds went when they left one place and returned months later was for centuries a confounding enigma. While some cultures, such as the ancient ocean-going Polynesians, had knowledge of seasonal bird routes, most of the world was in the dark.

Some people speculated birds hibernated rather than migrated. One 16th-century Swedish bishop, Olaus Magnus, hypothesized birds sank into the mud at the bottom of lakes or rivers, rising to the surface at the onset of spring. One 17th-century scientist, Charles Morton, believed the birds made a lunar landing. “Whither should these creatures go,” he wrote, “unless it were to the moon.”