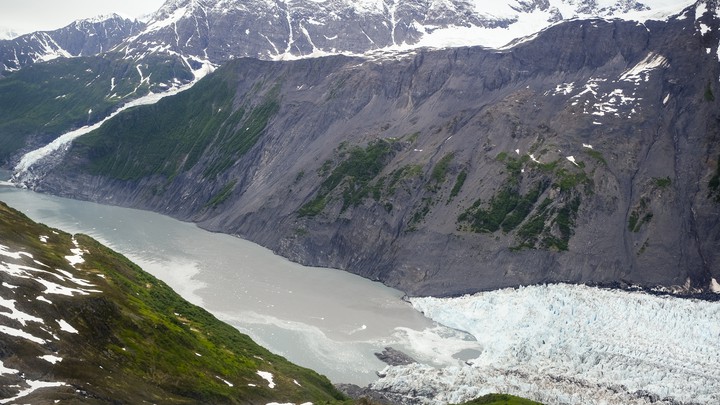 AK - The Alaska Tsunami That Can't Be Stopped

Melting ice has left one small town on the brink of disaster.

Tucked against glacier-capped mountains, the Begich Towers loom over the former secret military port of Whittier, Alaska; more than 80 percent of the small town’s residents live in these Cold War–era barracks. In a typical summer, Whittier’s harbor teems with traffic: barnacle-encrusted fishing boats, sightseeing ships, sailboats, super-yachts, and cruise-liner monstrosities. This summer, however, coronavirus travel restrictions put a damper on tourism in the usually buzzing port. Then came warnings of a potentially devastating tsunami.

Whittier residents have been mindful of tsunamis for generations. In 1964, the Good Friday earthquake was followed by three colossal waves, each more than 25 feet tall, that crushed waterfront infrastructure, lifting and twisting rail lines and dragging them back to sea. That earthquake—which killed 13 people in the town and caused $10 million worth of damage—still occupies Whittier’s memory.

With tons of rock and rubble precariously perched high above a nearby fjord, ready to crash into the sea, the town’s present is shaped by both its past and its preparations for an uncertain future. This destabilization is being driven by climate change. While many tsunamis are caused by earthquakes, some can be triggered by landslides. And in Alaska, landslide-generated tsunamis are becoming more likely as many hillsides, formerly reinforced by glaciers and solidly frozen ground, loosen their hold on once-stable slopes.