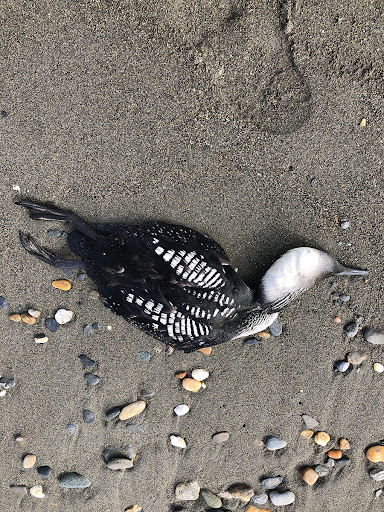 AK - Research has no answers for continued seabird die-off

Over the last several years, though, the bird colonies on the island have been shrinking, and no one has been able to determine why.
“They are literally seeing fewer birds on the cliffs, and they’re watching the birds fade away every year,” explained Alaska Sea Grant Marine Advisory Program Agent Gay Sheffield, based at UAF’s Northwest Campus in Nome. “These birds are a signal of the health of our ecosystem, and they’re also a food security item, so people have great interest. Why are birds here not in the best of health, and why are they dying?”
Across the region, dead seabirds have been washing up on shores in large numbers for several years now, and the problem seems to be getting worse.
“Starting in 2017, the northern Bering Sea has been experiencing seabird die-offs,” Sheffield explained. “Multi-species adults have been washing in dead, and that includes a variety of different types of birds. Typically, it has been shearwaters, murres, puffins, gulls, kittiwakes, and this year we had cormorants and loons wash up dead. It’s not normal.”
In addition to local subsistence hunter and beach goers finding dead birds on regional shores, the National Park Service recently conducted a survey of the Bering Land Bridge Preserve to study the seabird die-offs in the region. According to reporting from KNOM, they found upwards of 100 dead birds every four kilometers on some parts of the survey areas.
Researchers and scientists, including Sheffield, have posited theories about the seabird die-offs, known as wrecks in the scientific community, speculating disease, toxic algal blooms and food source scarcity, though scientists will have to do a lot more on-the-ground research before they can determine an official cause.
Since 2017, though, the majority of the dead seabirds have one thing in common. “Regardless of the species and regardless of the year, [the birds] have been documented in poor body condition, meaning they’re thin,” Sheffield explained. There are things that could make a bird thin. “One is: Is it sick with something, so it doesn’t feel good, and it doesn’t have the strength to go eat? The second would be: Is it being poisoned, so it doesn’t feel good, so it’s going to starve? Third, is it having trouble finding its food?,” said Sheffield.
“We’ve sent off numerous carcasses to the U.S. Fish and Wildlife Service for testing to see what the cause is,” said Brandon Ahmasuk, Kawerak Inc.’s Vice President of Natural Resources and acting Subsistence Resources Program Director. “The majority of test results just show that they’re starving. We’ve asked, ‘Why are they starving?’ and ‘Is it possible that they’re also being exposed to harmful algal blooms, toxins in the ocean?’”
Algal blooms occur naturally in the summertime but are becoming more frequent as the Bering Sea warms due to climate change. Blooms can produce toxins that poison fish, mammals and birds, according to the National Oceanic and Atmospheric Administration, though non-toxic blooms can be harmful, too. Non-toxic blooms can consume all the oxygen in the water, clog fish gills and smother bird food sources.