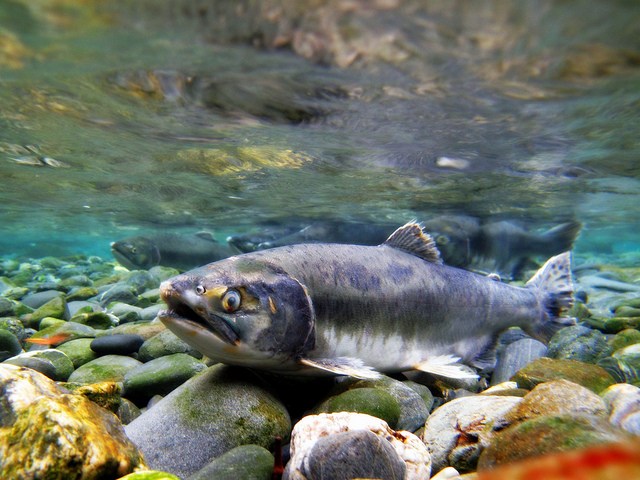 Scientists like to say that climate change is creating winners and losers in Alaska: Some species will struggle, while others could benefit from warmer habitats.

One of those climate change winners could be pink salmon in the Arctic, according to a new paper published by U.S. and Canadian scientists in a journal called Deep Sea Research Part II.

The study provides new evidence that global warming could produce higher numbers of pink salmon in the region, by making previously too-cold rivers and streams more hospitable for spawning.

The findings bolster reports by Alaska subsistence fishermen that the species’ numbers have been increasing as the Arctic warms at more than double the rate of the rest of the globe.

“Maybe in the past, they’d see a few adult pink salmon here and there every few years. Now they’re seeing them every year,” said Ed Farley, a federal fisheries scientists who works at the Auke Bay Laboratories in Juneau. “And so, the question becomes: Is this a signal for what might be happening for pink salmon in terms of their production for the future?”

Some Arctic residents are already changing their fishing techniques to target what they say are the increasing numbers of pink salmon arriving on their shores.

On Alaska’s North Slope, in the village of Kaktovik on the Beaufort Sea, Sheldon Brower said he normally fishes for Dolly Varden, a type of char; the mesh in his net is too small to catch salmon.

Next year, he said, he’ll use a net with larger mesh, in hopes of snagging more pinks. Brower said he doesn’t normally eat much salmon, but he’s eager to catch some.

“I’ve had some salmon strips and smoked salmon — I want to start trying to make that,” he said. “So, I want to try to catch as much as I can.”

Farley’s paper examined temperature observations in the hub town of Nome, on the Bering Sea.