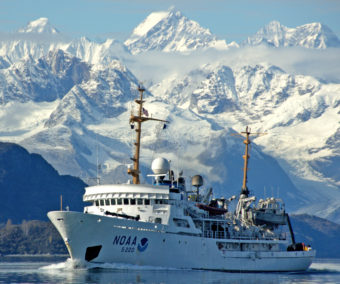 A long-sought revitalization of a National Oceanic and Atmospheric Administration facility in Ketchikan is officially underway. The project aims to give the NOAA ship Fairweather a permanent home.

The ceremonial groundbreaking marks the beginning of work on an $18.7 million project. There’ll be a new office building, utility upgrades and, most importantly, a floating pier to accommodate the NOAA research vessel Fairweather and its 50-plus crew.

“By revitalizing this facility, we can bring a steady flow of officers, our professional mariners, our logistical support specialists and our scientists to the city, creating a hub for NOAA’s maritime operations in the region,” Hann said.

The project has long been a priority for local and state officials. As industrial-scale logging slowed around the turn of the 21st century, the late U.S. Sen. Ted Stevens used his position as chairman of the appropriations committee to require NOAA to homeport the Fairweather in Ketchikan.