Hawaii & Alaska
Skiers cross the frozen lake in front of the Mendenhall Glacier in December. A proposed expansion of the Mendenhall Glacier Recreational Area by the U.S. Forest Service envisions motorized tour boat access in most alternatives, but the three newest ones based on previous public feedback limit vessels to low-impact electronic access or none. (Clarise Larson / Juneau Empire) 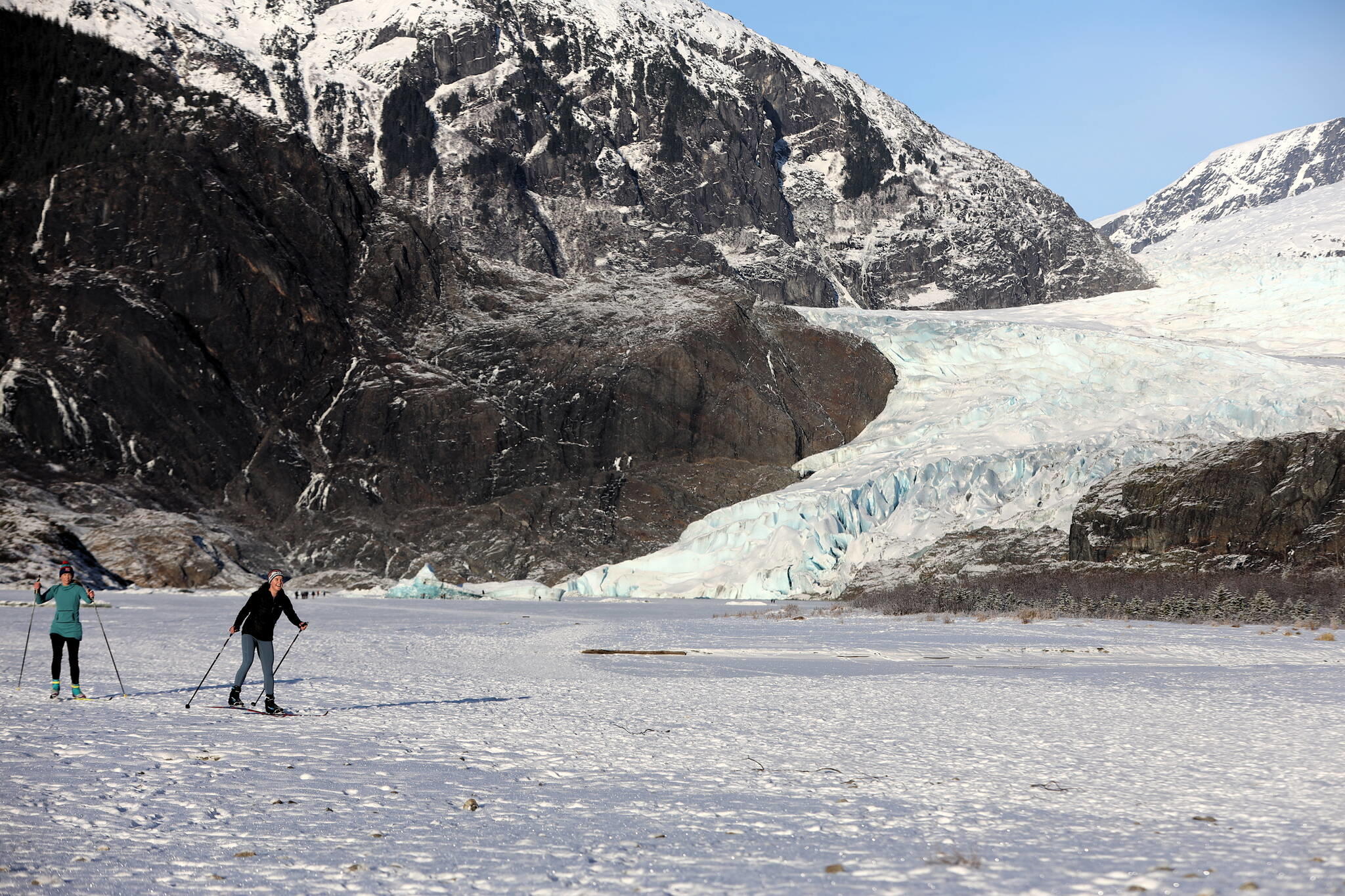 A huge new evaluation for overhauling the Mendenhall Glacier Recreation Area is in, and people still largely have the same huge concerns about the impacts of more facilities and visitors.

The various proposed changes to Juneau’s most popular tourist attraction, under public review since 2020, saw the latest chapters released Friday in what the U.S. Forest Service officially classifies as a supplemental draft Environmental Impact Statement. In layman’s terms, the report updates an EIS released last March by attempting to address subsequent public comments.

The lengthy process by Forest Service officials of choosing and implementing a preferred plan essentially involves figuring out the shapes of 15 puzzle pieces — representing various facilities, trails and management strategies — and the picture they’ll form when assembled.

Public comments on the new EIS are being accepted until Feb. 21, with printed copies of the study available for on-site use at the Juneau libraries and the Mendenhall Glacier Visitor Center the week of Jan. 9. An open house at the Mendenhall Glacier Visitor Center is scheduled from 4-7:30 p.m. Jan. 24 and a webinar is scheduled at 5:30 p.m. Jan. 26.

The first four public comments submitted online immediately after the report’s release all expressed varying degrees of opposition to the higher-development scenarios, favoring either no additional facilities or a couple of the least impactful proposals. There were also concerns about perceived oversights and errant assessments.

“I continue to object to expansion of impacts of tourism in this area,” wrote Carole Bookless, a Juneau resident for the past 14 years and bicycling enthusiast. Also, “I was surprised to read that there were no impacts to minority residents (described as over 50%) or low-income residents in the study area, because the Threadneedle and Kanata Deyi area have exactly that demographic and they would be impacted by traffic and air pollution.”

Furthermore, she asserts the report has no data on how many vehicle/bear collisions occur annually, stating traffic flow should be reduced if it’s a problem, and she favors a tour bus dropoff in a commercial area of the Mendenhall Valley where visitors can catch electric shuttles to the glacier area.

For people interested in a quick and easy overview, a three-page section beginning near the end of page 11 of the 394-page document lists seven issues raised during the public comment period and how the alternatives do or don’t address them. Alternatives 5, 6 and 7 in particular were developed based on concerns expressed about the original four alternatives.

Those four original options, which remain officially under consideration, including a “no-action” Alternative 1, followed by an Alternative 2 that features the most aggressive development and motorized access of all seven proposals, with Alternatives 3 and 4 each propose fewer impacts than the preceding alternative.

People wanting in-depth details to support particular advocacy arguments, investigate the nuances of specific impacts/areas and make “yes, but…” counterarguments to generalizations will find plenty to ingest in the other 391 pages. The easiest way to get a full overview of the specifics for all project components of all seven alternatives is a series of charts between pages 46 and 57. Similar charts showing the impacts for all alternatives are contained in the individual chapters assessing various issues summarized below such as environmental impacts and visitor experiences.

Buildings: the existing visitor center with possible improvements; a new welcome center offering food/retail/restroom facilities, possibly at a remote site where tourists would catch shuttle buses to the glacier area; a new remote glacier visitor area on the north side of the lake near the glacier, with some kind of boats access; and up to five new public use cabins in the campground area.

Trails: Steep Creek would see big changes in all development scenarios by shifting about 1,500 feet further from the water to restore salmon habitats and maintain the stream flow, and it would be extended with an elevated boardwalk with several viewing platforms.