Hawaii & Alaska
Go Iwahana, a scientist with the Unviersity of Alaska Fairbanks’ International Arctic Research Center, checks on conditions at a borehole in the permafrost research tunnel in Utqiagvik on Aug. 5. Behind him is Todd Sformo, a wildlife biologist with the North Slope Borough. Permafrost temperatures measured in the tunnel have increased by 3 degrees Celsius (5.4 degrees Fahrenheit) in the past decade. (Photo by Yereth Rosen/Alaska Beacon) 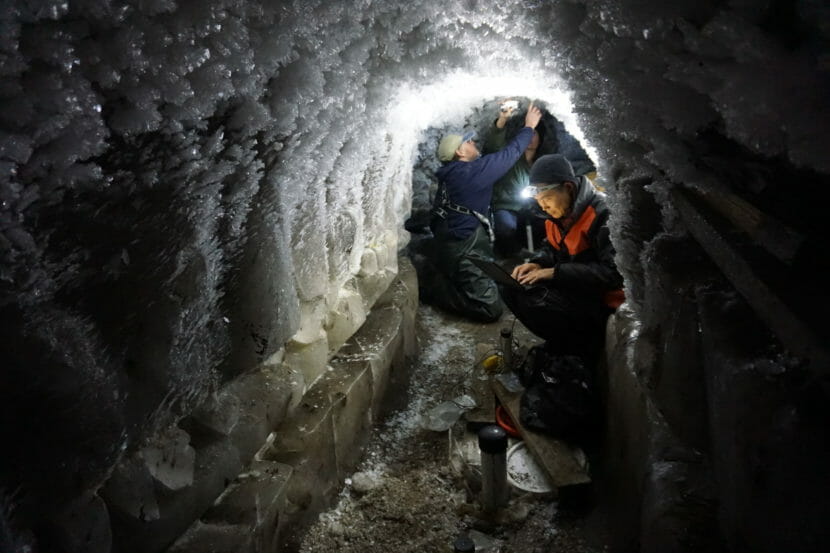 AK - In northernmost Alaska, a battle is on to limit the damages of permafrost thaw

Nearly 20 feet below the ground of a field of open tundra in the nation’s northernmost community, an icy world gives a picture of the ancient past and the future of this part of the Arctic.

Embedded in the walls of a tunnel is frozen peat, its features perfectly preserved from 10,000 years ago.

“It’s quite fresh, and it keeps the shape of the moss,” said Go Iwahana, a University of Alaska Fairbanks scientist who descended down a metal ladder to reach a low, 10-meter (32-foot) long tunnel built into the permafrost in the 1960s.

Sloshing below the floor are mobile pools of super-salty and bacteria-packed brine, the remnants of an ancient lagoon that dates back at least 40,000 years and is completely cut off from the Arctic Ocean.

Within the soil, though, the modern world is making its mark. Iwahana, crawling around along the low tunnel, sent probes 1.5 to 2 meters down boreholes to see how the modern world has made its mark. “Three,” he called out after reading a thermometer.

The soil here has warmed over the past decade from minus-6 degrees Celsius to minus-3 , or from 21.6 degrees to 26.6 degrees Fahrenheit, said Iwahana, who works at UAF’s International Arctic Research Center.

Findings at the tunnel are consistent with those elsewhere on the North Slope. As air temperatures rise, the soils as deep as 20 meters below the surface are warming at a rate of up to 4 degrees Celsius per decade, according to long-term measurements by UAF scientists.

For Utqiagvik, the North Slope’s biggest community and home to nearly half of the North Slope Borough’s residents, the unrelenting warming means trouble.

The most obvious is seen at the places where ice-rich permafrost is closest to the surface: the coastline at Utqiagvik’s downtown core, where a bluff has cleaved dangerously close to the edge of houses. Beneath one abandoned house is a gaping hole where the bluff has completely eroded away. Another house, owned by Doreen Fogg-Leavitt’s in-laws, is teetering on the edge.

“I remember 20 years ago, when her backyard to the edge was a good 30 feet, 40 feet. Now it’s about three,” said Fogg-Leavitt, natural resources manager for the Inupiat Community of the Arctic Slope, the local tribal government.

The North Slope has some of the fastest erosion measured in the nation, according to the U.S. Geological Survey, and rates have accelerated. The coastline is losing as much as 9.5 meters a month, according to findings by Williams College researchers presented in mid-December at the annual conference of the American Geophysical Union.