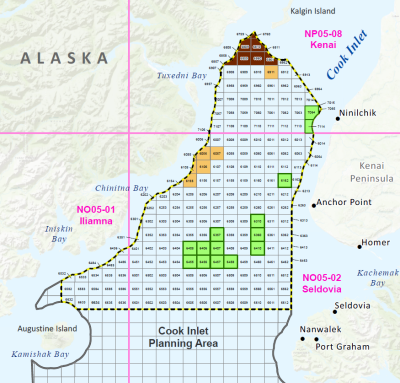 An auction for rights to drill for oil and gas in the federal waters of Alaska’s Cook Inlet drew only a single bid, according to a BOEM statement.

A controversial auction for rights to drill for oil and gas in the federal waters of Alaska’s Cook Inlet drew only a single bid, according to results released Friday.

Hilcorp Alaska LLC, the dominant oil and gas operator in the Cook Inlet basin, submitted the sole bid in the lease sale held by the Department of the Interior’s Bureau of Ocean Energy Management. Nearly 1 million acres, broken into 193 blocks, had been offered in the auction, called Lease Sale 258. Hilcorp’s bid totaled $63,983, BOEM said.

Hilcorp, a unit of the privately held, Texas-based Hilcorp Energy Company, already holds 14 federal leases in the inlet. They were acquired in a 2017 sale held by BOEM in which Hilcorp was also the only bidder.

Hilcorp also submitted the only six bids received in a special Alaska Division of Oil and Gas lease sale for state territory in Cook Inlet, according to results released Friday. That state sale, which offered 721 tracts spread over 2.8 million acres, was added to the division’s schedule to coincide with the federal lease sale. Hilcorp’s submitted bids totaled about $360,000, according to preliminary results.

The federal lease sale, previously canceled, was held under congressional mandate. It drew a lawsuit last week that seeks to overturn the decision to hold it.

The sale was originally scheduled for earlier in the year, but BOEM in May called it off, citing lack of industry interest. That cancellation drew rebukes from Alaska politicians and from other pro-oil politicians. Among those objecting to the cancellation was Sen. Joe Manchin, a West Virginia Democrat. At his insistence, the Inflation Reduction Act, which was signed by President Joe Biden in August, included a provision mandating that Lease Sale 258 be resurrected and held by the end of 2022.

The revival of Lease Sale 258, in turn, drew angry responses from environmentalists and from organizations and some residents of the region.

The Bureau of Ocean Energy Management (BOEM) today held Cook Inlet Oil and Gas Lease Sale 258 as directed by the Inflation Reduction Act of 2022. The sale generated one bid for one tract. The bid, in the amount of $63,983, was submitted by Hilcorp Alaska LLC.

Following today’s sale, the bid will go through a 90-day evaluation process to ensure the public receives fair market value before a lease is awarded, and a Department of Justice review of antitrust considerations. If a lease is awarded, it will be posted to BOEM’s website following the 90-day review. All materials and statistics for Lease Sale 258 are available at www.boem.gov/ak258.

The reading of the bids was conducted via livestream. The lease sale is now concluded. One bid was received on one block. The bid, in the amount of $63,983, was submitted by Hilcorp Alaska LLC.

Following today’s sale, there will be a 90-day evaluation process to ensure the public receives fair market value before a lease is awarded, and a Department of Justice review of antitrust considerations. If a lease is awarded it will be posted to BOEM’s website when the review process is completed.

The U.S. government on Friday said it received one bid for the right to drill offshore for oil and gas in Alaska’s Cook Inlet near habitat for bears, salmon, humpback whales and endangered beluga whales.

The company is a unit of Hilcorp, which is the largest privately held oil and gas exploration and production company in the United States. It already has leases to drill for oil and gas in onshore areas of Cook Inlet, which stretches from Anchorage to the Gulf of Alaska.

The Bureau of Ocean Energy Management, which conducted the sale via livestream, was offering leases for 193 blocks totaling some 958,000 acres (388,000 hectares) but received just one bid for one block.

The U.S. Interior Department in May said it would not move forward with the Cook Inlet lease sale due to a “lack of industry interest.” But over the summer, Congress passed legislation that called for a Cook Inlet lease sale by year’s end and two Gulf of Mexico lease sales next year. The provisions were part of the Inflation Reduction Act, a sprawling package that also included major investments to fight climate change.