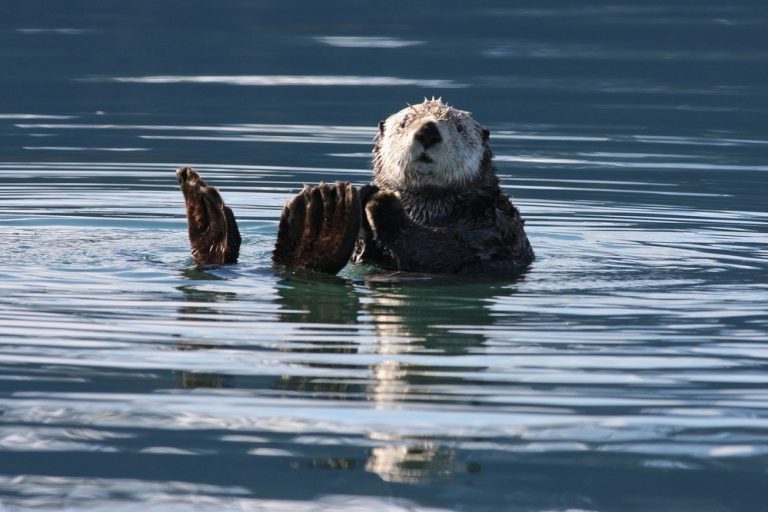 Kachemak Bay, a microcosm representing all of the estuarine and coastal habitats found in the Gulf of Alaska, has shown signs of reduced environmental integrity in recent years. Our ecological assessment and related products will give numerous stakeholder groups the tools needed to inform coastal managers of issues affecting Kachemak Bay and similar areas along Alaska’s coasts.

Since the signing of the North Pacific Fur Seal Convention in 1911, sea otters have been making a comeback in Alaskan regions where they had previously experienced local extinction. This repopulation has had various direct and indirect impacts on local ecosystems. As part of a larger ecological assessment, NCCOS has created a story map to describe the impacts of sea otter population increase and variability in Kachemak Bay, Alaska.

The story map presents various factors that influence sea otter population numbers, distribution, and their interactions with the varied ecosystems they inhabit. This is one of several products from the NCCOS Project – Ecological Assessment for Kachemak Bay, Alaska: Science Tools to Inform Management. This tool will be useful when communicating about changing coastal ecosystems and marine resources in Kachemak Bay and other Alaska coastal areas to coastal resources managers, the public, and local students.

Why We Care
Kachemak Bay is a subarctic estuary in south/central Alaska that contains all of the estuarine and coastal habitats found in the Gulf of Alaska, including the rocky intertidal, kelp forests, seagrasses, mudflats, glacial rivers, and salt marshes. It is home to threatened and endangered marine species, and provides refuges and habitat for shellfish, fish, seabirds, and marine mammals. Due to these rich marine resources, Kachemak Bay is a state-designated critical habitat area, a National Estuarine Research Reserve (NERR), a NOAA Habitat Focus Area (HFA), and the site of the NCCOS Kasitsna Bay Laboratory. The bay supports recreational, subsistence, and commercial fishing; marine transportation; and tourism. In recent years, declines in shellfish and fish populations; increased fishery closures; threats from harmful algal blooms, oil and gas development, ocean acidification, invasive species, and pathogens have become worrisome. Our ecological assessment of Kachemak Bay will incorporate various data sets into a consistent framework, making it easier for stakeholders to understand the state of the bay and track trends or changes to it.

What We Are Doing
This project will begin with regional meetings that engage stakeholders to identify priority issues, data sets, and product development and design. We will leverage expertise from numerous researchers and long-standing partnerships in the Kachemak Bay area, including the Kachemak Bay National Estuarine Research Reserve, NOS Coast Survey, and NOS CO-OPS. This project will serve as a model for cross-NCCOS project execution, with federal and contract staff from Kasitsna Bay, Beaufort, Silver Spring, and Oxford working together to facilitate and improve collaborations and training.

The team will develop products that incorporate various data sets, including geospatial (bathymetry, benthic and shoreline habitat maps, aerial imagery, ocean circulation) and observational (oceanographic, harmful algal blooms, contaminant, drop-camera imagery, ocean acidification) data for Kachemak Bay. We will build on previous NCCOS work, including the Kachemak Bay BIOMapper tool, and a NMFS-funded clam restoration project for the Kachemak Bay HFA. Also, we will enhance the Kachemak Bay ecological assessment by incorporating products from two, 2018-funded NCCOS discretionary science projects: one that will assess risks of Vibrio bacteria in oysters, and another that will inform shellfish aquaculture siting.

Benefits of Our Work
The Kachemak Bay ecological assessment will help inform resource and coastal managers of estuarine and coastal habitat issues affecting not only Kachemak Bay, but other coastal regions in Alaska, such as Cook Inlet and the Gulf of Alaska. Results and products from the Kachemak Bay ecological assessment will identify gaps in available information and help inform priority-setting for future NCCOS and partner research efforts.