Hawaii & Alaska
More than 2.4 million acres have burned across the interior of Alaska this year. YouTube screenshot 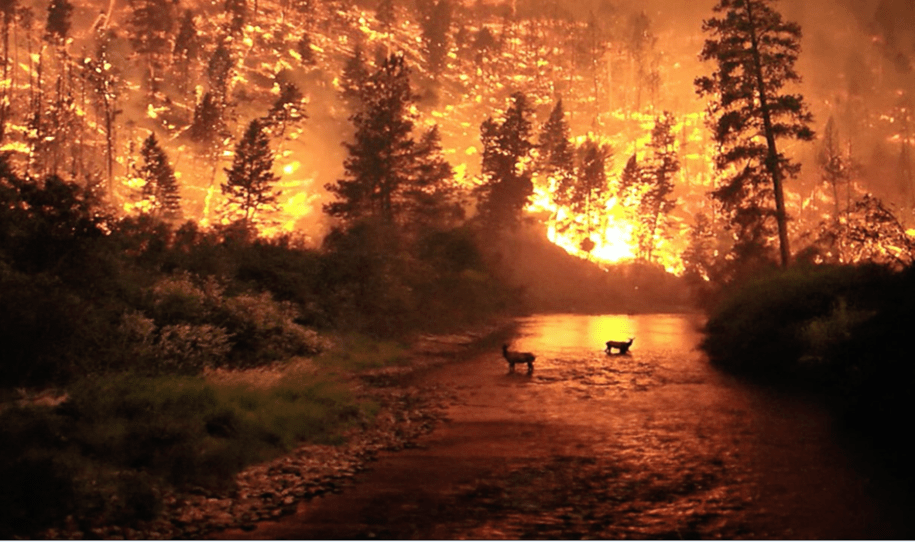 AK - Earth Matters: As Alaska and Siberia blaze, the Arctic is warming faster than previously calculated

The hot and dry start to the summer in Yukon and Alaska has sparked record-breaking wildfires across the Taiga (Boreal Forests) and the tundra. Over 5000 lightning strikes from June 21 through June 30 have threatened indigenous villages in the far north with incineration and unhealthy smoke. Fire fighting resources are stretched thin in both Alaska and Yukon. So far, the fires have consumed 2 million acres so far in 2022. That is ten times greater than all of 2021.

Nowadays snows melt earlier in the springtime. Lakes, rivers, and bogs freeze much later in the autumn. Reindeer herding becomes more difficult as the ice is weak and may give way … All sorts of unusual events have taken place. Nowadays the winters are much warmer than they used to be. Occasionally during winter time it rains. We never expected this; we could not be ready for this. It is very strange … The cycle of the yearly calendar has been disturbed greatly and this affects the reindeer herding negatively for sure …”

She told that to reporters two years before the first comprehensive report on climate change impacts in the Arctic was published. Researchers at the time pointed out that the Arctic was warming much faster than the global average. This was pointed out to much ridicule from fossil-fueled climate science deniers, some of whom went so far as to claim that summer sea ice in the Arctic was not dwindling but spreading. Back to that in a moment.

The hot and dry start to the summer in Yukon and Alaska has sparked record-breaking wildfires across the Taiga (Boreal Forests) and the tundra. Over 5000 lightning strikes from June 21 through June 30 have threatened indigenous villages in the far north with incineration and unhealthy smoke. Fire fighting resources are stretched thin in both Alaska and Yukon. ...

Meanwhile, wildfires in Siberia, which set a record in 2021, are double in the first six months of 2022 what they were the first half of last year. Throughout the Arctic, climate change is driving warming, increasing the number and intensity of wildfires. The scientific view has been that the speed of Arctic warming is about two times faster than the global average rise. Last December, however, a study concluded that warming is rising four times as fast as the global average. From Science:

The Arctic is warming twice as fast as the rest of the world. But that figure, found in scientific studies, advocacy reports, the popular press, and even the 2021 U.N. climate assessment, is incorrect, obscuring the true toll of global warming on the north, a team of climate scientists reports this week. In fact, the researchers say, the Arctic is warming four times faster than the global average.

“Everybody knows [the Arctic] is a canary when it comes to climate change,” says Peter Jacobs, a climate scientist at NASA’s Goddard Space Flight Center, who presented the work on 13 December at a meeting of the American Geophysical Union. “Yet we’re misreporting it by a factor of two. Which is just bananas.”

Researchers in a study published this month have come to the same conclusion.

"Thirty years is considered the minimum to represent climate change," said Petr Chylek, a physicist and climate researcher at Los Alamos National Laboratory and lead author of the study in Geophysical Research Letters. "We decreased the time interval to 21 years. At that smaller time scale, and contrary to previous investigations that found the Arctic amplification index increases in a smooth way, we observed two distinct steps, one in 1986 and a second one in 1999." [...]

The study calculated the Arctic amplification index to be greater than 4 within the early decades of the 21st century, four times faster than the global mean and considerably more rapid than previous published research had determined using 30- to 40-year time intervals. ...

"People are not only interested in long-term climate change, but they are also interested in 10 years ahead, 20 years, 30 years. For decadal prediction, our observation that the amplification index changed in the past in steps is quite important," Chylek said.

Two decades ago, scientists worried about changes in the Arctic were afflicted by an unhelpful mainstream media that gave equal billing to climatologists and fossil-fueled climate science deniers. In 2004, the Arctic Climate Impact Assessment (ACIA), the first comprehensive look at impacts of climate change in Arctic, was published. The four-year study was produced by an international team of 300 scientists.