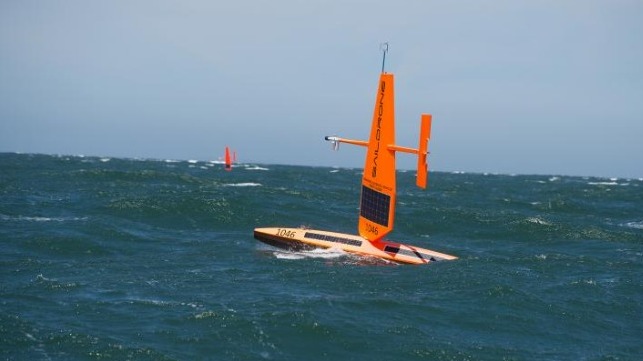 As a result of COVID-19, many research surveys were canceled, and we weren’t able to conduct our walleye pollock surveys. Data collected from these surveys are critical to manage pollock, which comprise the nation’s largest commercial fishery.

NOAA Fisheries scientist Alex De Robertis at the Alaska Fisheries Science Center developed a contingency plan: conducting the survey with saildrone wind- and solar-powered ocean-going robots. The hope was to collect some data despite the vessel survey cancellation.

For the past several years, De Robertis and colleagues at the Alaska Fisheries Science Center have been working with partners at NOAA Research’s Pacific Marine Environmental Laboratory,  Saildrone and Kongsberg. They use uncrewed surface vehicles equipped with low-power sonar (acoustic) sensors to conduct research in the Bering and Chukchi Seas. The pollock survey contingency plan was an opportunity to apply what they had learned to collect data for resource management.

“We were impressed with how well the saildrones performed. This was particularly helpful in a year when there are no other sources of survey information for pollock,” said De Robertis. “From a technical standpoint things went as well as one could have hoped. The saildrones and the acoustic equipment we use to count fish performed flawlessly while at sea for five months.”