Hawaii & Alaska
Salmon churn the water, waiting for their chance to make their way up the fish ladder at Douglas Island Pink and Chum, in Juneau, Alaska, in 2017. Becky Bohrer / The Associated Press 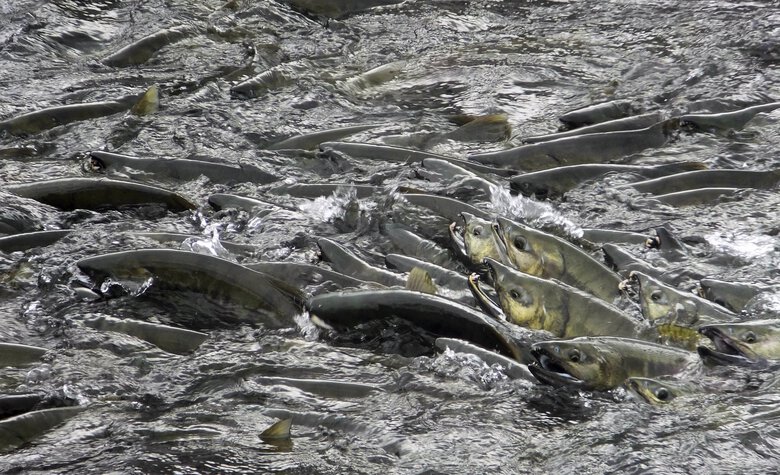 Alaska salmon have gotten smaller in recent decades, a downsizing that appears to be largely driven by climate change and increased competition for food as hatcheries release some 5 billion young fish into the North Pacific each year, according to a study published this month by U.S. and Canadian researchers in the science journal Nature Communications.

Alaska provides the vast majority of the United States’ wild salmon, and their smaller size is reducing the number of eggs that these fish produce and their value to commercial and other fishermen.

That decline encompasses salmon runs all over the state but varies by species and region. Chinook returning across a broad expanse of western and northern Alaska were some 10% smaller than the average size before 1990. Meanwhile in southeast Alaska, sockeye salmon declined — on average — by only about 2%.

Many of these salmon appear to be returning from the ocean earlier to freshwater spawning grounds, and that’s why they are smaller as they reach coastal-area harvest zones.

“There are two ways they could be getting smaller — they could be growing less and be the same age but smaller, or they could be younger — and we saw a strong and consistent pattern that the salmon are returning to the rivers younger than they did historically,” said Eric Palkovacs, study co-author and professor of ecology and evolutionary biology at the University of California, Santa Cruz.

The study used Alaska Department of Fish and Game sampling information gathered between 1957 and 2018 from 1,014 locations across the state. The study looked at 12.5 million size and age measurements from chinook, coho, chum and sockeye, four of the five species of salmon that return to spawn in freshwater.

Chinook are the largest salmon. The study estimates that the body-size declines observed in chinook have decreased egg production by 16%, knocked 21% off their value and reduced by 26% the meals that these fish can provide to rural Alaskans.

“Reductions for other species were less dramatic but still substantial,” the study stated.

Others researchers also have looked at the decline in chinook size. A study by University of Washington and federal fishery researchers published last year in the proceedings of the National Academy of Sciences looked at chinook that returned to spawn in West Coast river systems but migrated to feed in ocean waters much farther north.