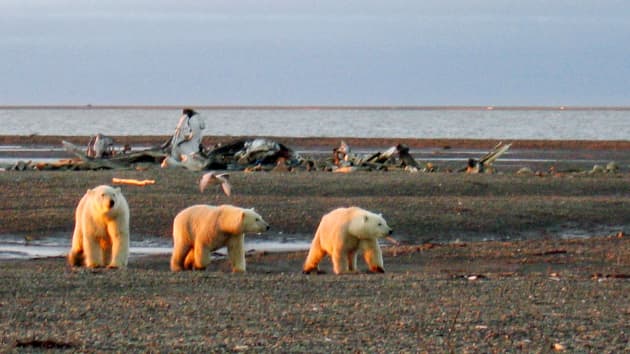 AK - After Decades-Long Push, It's Not Clear Who Will Bid In Arctic Refuge Oil Lease Sale

The event, January 6, marks a major moment in a 40-year fight over whether to developthe northernmost slice of the refuge's coastal plain, home to migrating caribou, birds and polar bears.

Biden, as well as his pick for Interior Secretary — Rep. Deb Haaland — oppose drilling in the refuge. The hand-off of drilling rights to the highest bidders could make it more difficult to reverse course.

But despite the high stakes, uncertainty looms over how much oil is actually trapped under the million acres of tundra up for leasing, and how much industry interest there is to go find it.

'We don't know very much about this area'

The data on what's under the coastal plain is decades old.

"We don't know very much about this area," says David Houseknecht, a geologist with the U.S. Geological Survey. Oil seeps and rock formations seem promising, but he says the agency hasn't estimated the coastal plain's oil potential since the late 1990s.

Back then, it relied on seismic testing from a decade prior, technology that's now outdated. It found that anywhere from about 4 to 12 billion barrels of recoverable oil could lie beneath the federal lands. That's a whole lot of oil, but also "a very large range of uncertainty," Houseknecht says. "The seismic data that we have are quite old, low resolution and a sparse grid."

The other challenge, he says: There's no data from actual wells in the refuge.