Hawaii & Alaska
Members of the Search for Slhawt’ citizen science team collect data on where herring spawn, roughly how many eggs are produced and how they develop, giving scientists a baseline to compare future changes against. Photo: Kieran Brownie 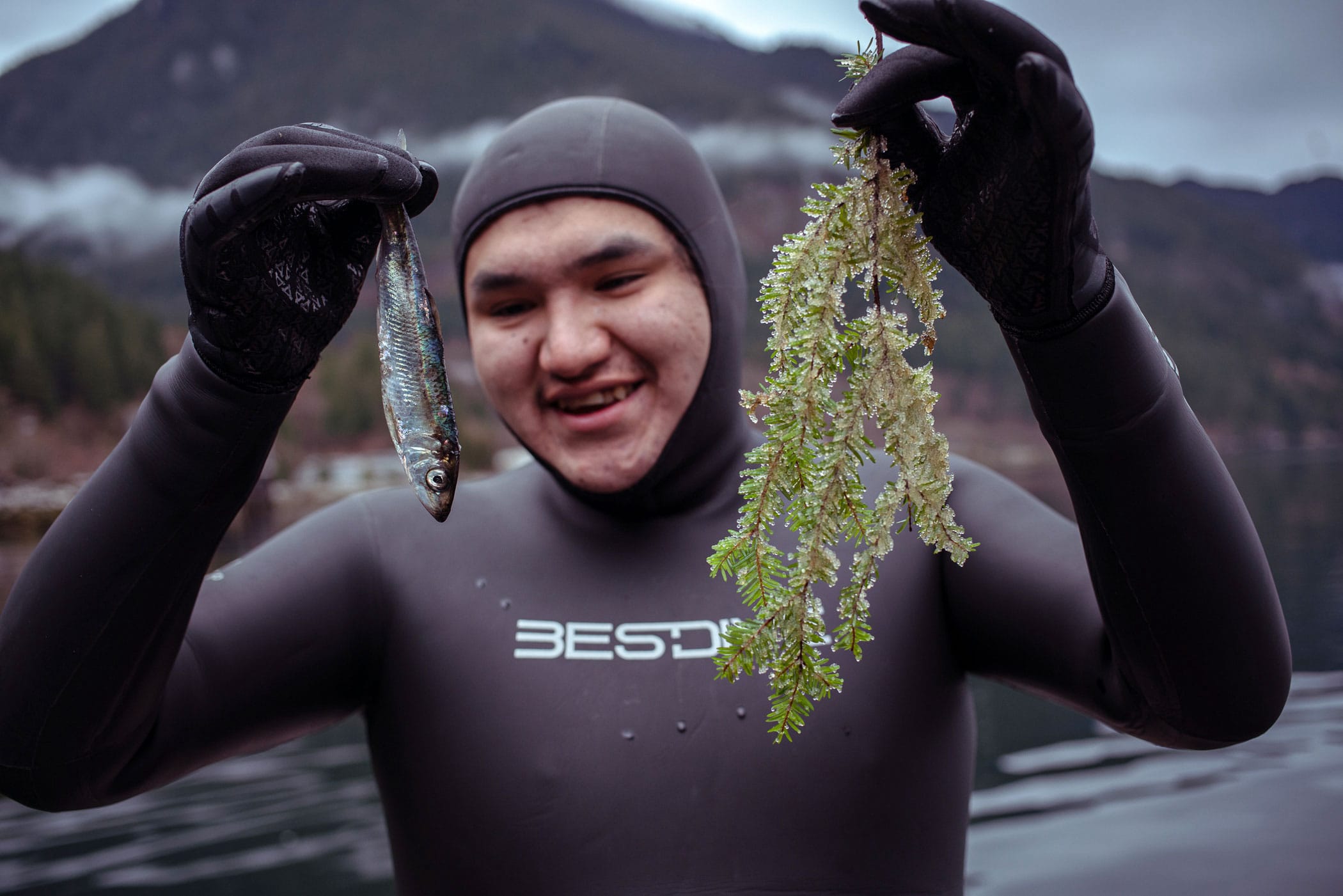 Herring all but disappeared from the shorelines around Sḵwx̱wú7mesh homelands in the past. Now volunteers are keeping careful tabs on the comeback efforts of a tiny fish with big cultural value

This article was originally published on Hakai Magazine.

‍Jonny Williams squeezes into a soaped-up wetsuit near the base of British Columbia’s Tantalus Range, a series of 2,000-plus-metre peaks that give rise to the region’s moniker, Sea to Sky. The water he slips into is like glass, an unexpected gift in a glacier-etched fjord known to funnel high winds. As he kicks his fins along the shoreline, jets of seawater sparkle as they meet the sun. A while later he bobs back up and yells, “I almost smoked my head!” With plankton in bloom, visibility in the shallow water is an arm’s-length ahead, and rocks seem to come out of nowhere.

It’s Tem Lhawt’, the time of the herring, in the heart of Sḵwx̱wú7mesh homelands. In early spring, the small team of young citizen scientists Williams belongs to fires up the outboard engine and zips an aluminum boat to locations along the steep western wall of these shores. At each stop, someone suits up, dives in and scans every nook, searching for signs of a population of herring that Fisheries and Oceans Canada deems too peripheral for regular monitoring.

From above, Howe Sound, known as Átl’ḵa7tsem among other names, looks like an open crab claw with a meandering, river-fed arm. Tucked into the base of its arm is the District of Squamish, an old mill town turned luxe outdoor haven midway between Vancouver and Whistler, that colonizes the name Sk̲wx̲wú7mesh. Where the crab claw meets the Salish Sea, the pinchers hook around a cluster of islands.

The spectacle of herring spawn — adult fish returning to these shores to blanket tens of thousands of eggs with a milky, turquoise cloud of seminal fluid known as milt — is over in a matter of days. Some of the eggs, glommed onto vegetation such as rockweed, will be fertilized, and if the waves that wash across them are gentle and predators stay away, larval fish will emerge. To me, the clear bubble-like eggs the size of millet that Williams searches for seem too minuscule to be of much consequence in Átl’ḵa7tsem. But to Williams and the four other citizen scientists who make up the core herring search team, knowing where these eggs land and flourish enables them to put a finger to the pulse of a waterway that environmentalists once declared dead.

The ghosts of resource extraction surround us: two pulp mills that choked the sound with logs and bleaching agents like chlorine dioxide, chemical plants that leached mercury, underwater dump sites from dredged sediment and a beachfront copper mine that was once the biggest source of toxic metals in North America’s waterways.

Biologists studying herring can’t say specifically how these industries correlate with the fish’s health, but locals are confident the impact from past industrial practices was only negative. Looking around at rusty chemical tanks and other remains along the shores, it’s hard to imagine herring choose to surrender their eggs to these shallows at all.