Coastwide
Since the 2019 flood, Lory Stoneburner has been unable to live in her Green Bay, Wisconsin, home. | Photos by John McCracken 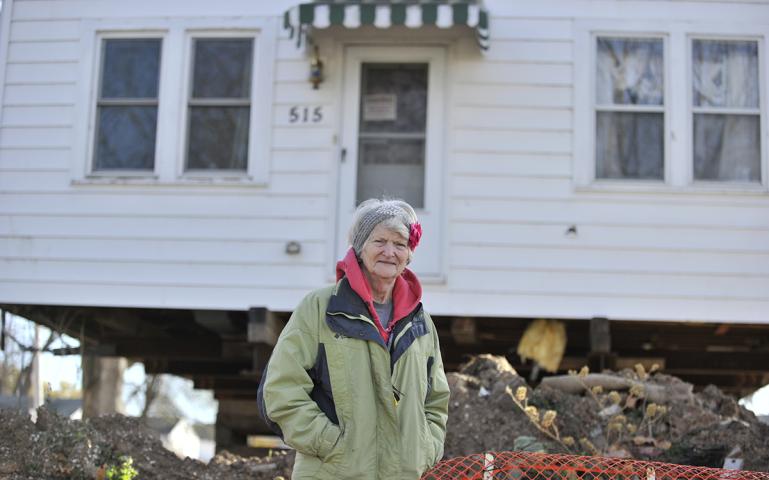 USA - After the Flood

Climate resiliency, in practice, is slow, frustrating, expensive, and so very necessary

At 4:30 A.M., she was getting ready for work and noticed her chihuahua Bandit pacing and yelping. Stoneburner, 74, traced the noise to the basement of her Green Bay, Wisconsin, home.

“I opened up the basement door,” says Stoneburner, “and in eight minutes I watched the water go eight feet.”

She frantically called 911. Looking out her front door, she saw water from the street pouring into her Hartung Street basement. “A gush of water going on in my basement, that's what all the rumble was,” she says.

On March 15, 2019, Green Bay’s East River flooded, causing the city to declare a state of emergency for homes near the river. Wisconsin municipalities experienced rapid snowmelt and heavy rainfall that same week, and Governor Tony Evers issued a state-wide emergency.

Stoneburner and Bandit were rescued via boat. Rusty, her cat of 16 years, did not survive the flood.

In a situation sure to become increasingly common in the new age of climate disasters, Stoneburner’s home was one of 36 Green Bay homes that were condemned as a result of the flood, and she hasn’t been able to live in it. Before she can, her home must be elevated and have its foundation rebuilt to meet floodplains standards. She’s resolved to keep her home of over 20 years, but found that rebuilding after a flood isn’t easy, cheap, or straightforward.


The cost of flooding

“I knew this was a flood zone when I bought it,” says Stoneburner, “but there hadn’t been a flood here for I don’t remember how many years.”

Wisconsin, like the rest of the Midwest, is getting wetter and hotter due to climate change. The state’s annual precipitation has increased 17 percent since 1950, according to a recently released Wisconsin Initiative on Climate Change Impacts (WICCI) report. (It also found average temperatures have risen 3°F.) Rainfall in 2019 set a new record for Green Bay’s annual precipitation rate after 133 years.

The 42-mile East River cuts through Green Bay area suburban developments, agricultural communities, and dense east side neighborhoods on John, Cass, Mason, and Hartung Streets, which were submerged in 2019. Twenty years before her basement flooded, Stoneburner said she saw a large flood in 1990 where two people were trapped, and later rescued, under the Mason Street bridge, a few hundred feet from her home.

Stoneburner said she would have abandoned the property if her daughter hadn’t wanted to own it one day. Plus, finding a new place to live was daunting given Green Bay’s housing crisis, another reflection of an ongoing national crisis.