Hawaii & Alaska
CINDY ELLEN RUSSELL / CRUSSELL@STARADVERTISER.COM The owner of a Sunset Beach home at 59-147 Ke Nui Road has illegally poured concrete directly onto the beach in an effort to try to protect the property. 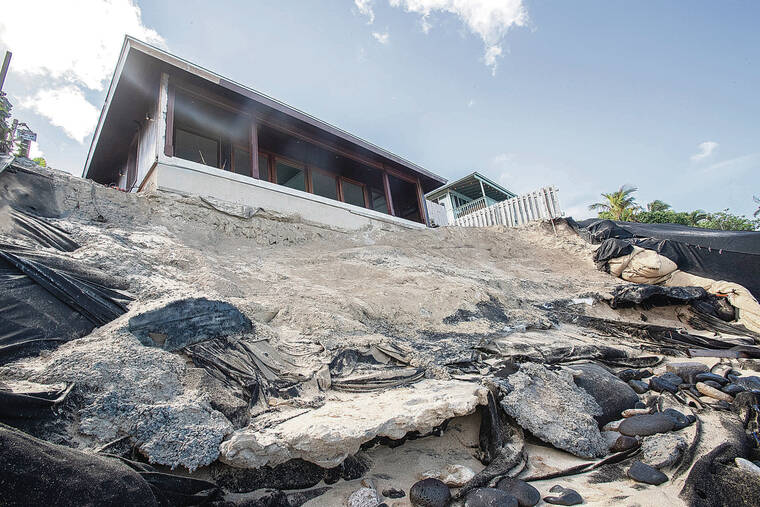 HONOLULU (HawaiiNewsNow) - In a particularly flagrant rebuff of Hawaii conservation laws, a North Shore homeowner faces fines of $15,000 a day after state officials say he used concrete and rebar to fill in the exposed foundation of his beachfront home and harden a stretch of sand with an apparent glue.

The work has triggered outrage, with residents and lawmakers arguing the modifications pose safety risks.

The state Office of Conservation and Coastal Lands issued a notice of violation Friday to the owner of a home on Ke Nui Road in Sunset Beach. They said a site inspection found the foundation of the property, which was previously undermined by erosion, secured with rebar and cement.

The state is giving the homeowner 30 days to remove the concrete or face mounting fines.

“To say that he should be allowed to armor it and build it and defend it at all costs, I think that is a terrible position to be in,” he said. “And I think he is making it very difficult for the people trying to do the right thing.”

The owner of the home ― identified as Joshua VanEmmerik ― is hardly the first to take matters into his own hands to try to protect his home from worsening erosion on the North Shore as sea levels rise.

But the scale of the modifications in this case are particularly significant ― and potentially dangerous.

“If someone gets caught in the water with those sharp pieces of cement and the rebar thing, (they) could get very seriously hurt,” said UH-Manoa School of Earth Science and Technology Interim Dean Chip Fletcher.

“Not to mention the beachgoers that are walking back and forth.”