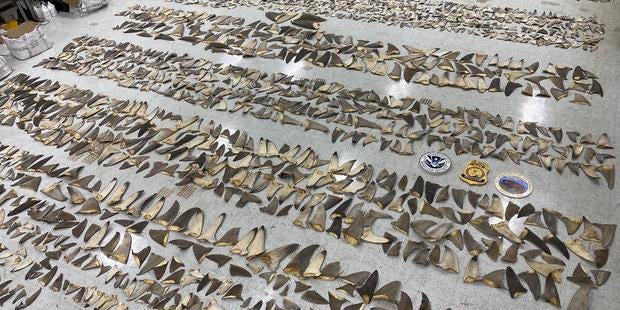 1,400 pounds of shark fins worth about $1 million were seized in a Miami port

Wildlife inspectors seized 1,400 pounds of dried shark fins at a Miami port, CBS News reported. While it's not illegal to sell shark fins in the US, the shipment contained species protected in the US. Activists have lobbied Congress to ban the sale of shark fins nationwide.

The 18 boxes of shark fins were valued between $700,000 and $1 million, CBS News reported, citing officials. US Fish and Wildlife Service officials believe the shipment was on its way from South America to Asia, where shark fins are used for cooking and traditional medicine.

Customs and Border Protection helped with the investigation and said the boxes were falsely declared.

While shark finning is illegal in US waters, buying and selling fins is not. However, the shipment violated the Lacey Act, which bans the trade of illegally obtained wildlife, CBS News reported. The shipment contained shark species protected by the Convention in International Trade in Endangered Species of Wild Flora and Fauna.